A new deal between Teekay Offshore Partners and the operators of the Newfoundland offshore oil complex will see the replacement of Canada's four largest tankers.
The new deal, effective June 1, 2015 sees three of the present shuttle tankers remaining in service for a time, and three new tankers to be built to serve a 15 year contract.

The offshore owners have banded together to arrange for the shuttle tankers to serve the Hibernia, Terra Nova, White Rose and Hebron oil fields. These owners are Exxon Mobil Canada, Chevron Canada, Statoil ASA, Husky Energy, Suncor Energy and Murphy Oil.
Teekay is a world wide tanker operator, but for tax reasons, its headquarters is in Vancouver. To serve the Newfoundland offshore, they are establishing an office in St.John's.They have announced that they will order three new Suezmax DP2 tankers from Samsung Shipbuilding in South Korea for delivery Q4 2017 to Q2 2018.

Of the existing four tankers, Kometik is apparently not involved in the deal. Even though it is currently owned by a consortium of the oil field owners (Chevron 21 shares, Exxon Mobil 27 shares, Mobil Canada Hibernia Co Ltd 5, Chevron Hibernia Holding Co Ltd 5, and Murphy Atlantic Offshore Oil Co Ltd 6 shares) and managed by Canship Ugland.
It was built by Samsung in 1996 and measures 76,216 grt, 126,646 deadweight.

Kometik was built for offshore loading over the bow, and winter navigation. 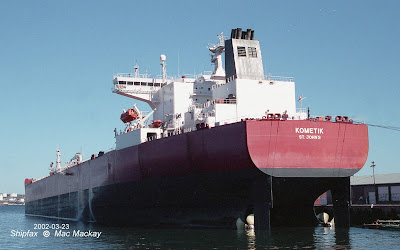 It was also built with twin screws to help manouevering around the Hibernia gravity structure.

Rumours published on Halifax Shipping News last week are apparently true that the ship will be sold.


Sister ship Mattea will remain in service but only until September when it will be replaced by Teekay's Navion Hispania, built in 1999 by Astileleros Espanol SA, in Puerto Real, SpAin, measuring 72,753 grt, 126,183 dwt. 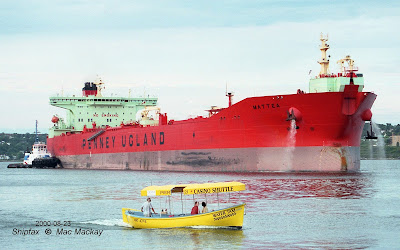 Mattea was built in 1997 by Samsung and measures 76,216 grt, 126,360 dwt.  It is owned by Penny  Ugland, a joint venture between Pennecon of Newfoundland and JJ Ugland of Norway.

Two never ships, which were built for a 15 year charter to Husky for the White Rose offshore project, will remain with Teekay until the new ships arrive. Both came from Samsung in 2005 and measure 80,918 grt, 148,706 dwt. They initially operated under Norwegian flag, but were transferred to Canadian in 2009. 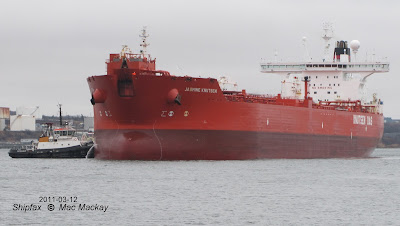 Jasmine Knutsen and Heather Knutsen are owned by entities in the Knutsen company of Haugesund, Norway and managed by Canship Ugland.
Teekay however will be taking over direct operation and management of the ships, which will continue to sail under the Canadian flag with Canadian crews, with perhaps a change of name.

All these ships have called in Halifax from time to time for repairs, bunkers and maintenance.