The herring seiners were not the only colourful ships in harbour today. An early arrival was the autocarrier Suzuka Express. 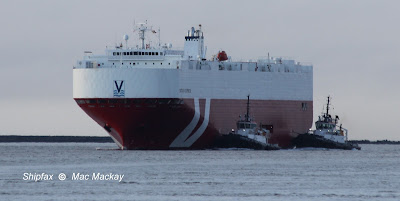 Suzuka Express has taken its tugs on the way in this morning.

Wearing the colourful livery of  Vroon BV of the Netherlands, the ship was built in 2010 by Mitsubishi Heavy Industries in Shimonoseki, Japan. It has a capacity of 3,930 cars on 10 decks, and measures 43,810 grt, 15, 154 dwt.It flies the Panama flag Unusual for car carriers, its owners publish a spec sheet on their web site: http://www.vroon.nl/  (Look under fleet)


Later in the day the Marshall Islands flag tanker Torm Ragnhild came to anchor for Asian gyspy moth inspection before it moved to Imperial Oil to unload.

Dominion Diving's launch Halmar has taken the pilot off the ship because the pilot boat is outside working another ship.

A fairly typical handysize tanker of 30,018 grt, 46,168 dwt, it is a stand out due to its owner's colour scheme, and the rare sight of a hull banner on a product tanker..

Built by STX Shipbuilding Co in Jinhae, South Korea, it is operated by Torm A/S: http://www.torm.com/
The well known Danish company has been experiencing heavy financial weather since 2010, and has been restructured. It has just shown its first profitable quarter thanks in part to an increased demand for tankers.