The Campbells are coming

Well only one Campbell, and it is USCGC Campbell WMEC 990, a Famous class medium endurance cutter based in Kittery, ME. It has called in Halifax on several other occasions as a courtesy visit, often towards the end of military exercises. 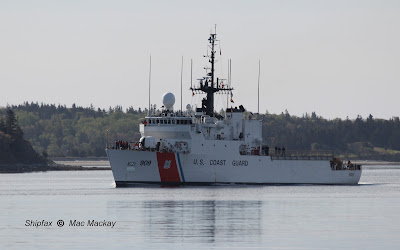 USCGC Campbell glides past Macnab's Cove on its inbound passage this morning.

Built in 1986, commissioned in 1988, the cutter has figured in several important drug busts in addition to the usual search and rescue operations. It is a member of the Famous class, named for previous USCG cutters that achieved fame. In fact it is the sixth cutter named Campbell, but it was the fifth one that achieved the most fame, a veteran of World War II., Korea and Viet Nam, that lasted 46 years in service.
http://en.wikipedia.org/wiki/USCGC_Campbell_%28WPG-32%29
Also see the current Campbell's official web site:
http://www.uscg.mil/lantarea/cgcCampbell/