Quiet on the eastern front

It was a quiet day on the waterfront - if you don't count herring seiners - which I do. There were six. All arrived this morning and it was a major traffic jam at pier 24 as they unloaded and some took on ice.
Aside from the four boats that have been here regularly, the Tasha Marie finally made an appearance.
Built in 1979 by John Manly Shipyard in Vancouver as Cindy H, it is owned by the intriguingly named Turpentine Seiners Ltd of Wedgeport, NS. 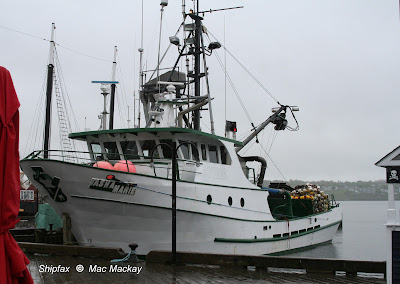 Tasha Marie tucked in at Queen's Wharf after unloading then returned to pier 24 to take on ice.
The skull and cross bones on the right was part of a waterfront event, not associated with this boat.

Also arriving for the first time this year was Sealife II. It is now owned by Comeau's Seafoods Ltd of Saulnierviulle and sports the company's blue hull colour, but it was always a red hull before that. 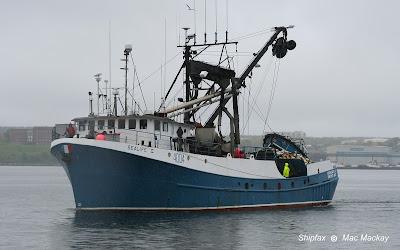 Sealife II rounds up to come alongside the Tall Ships Quay.

Built in 1970 by Ferguson Industries in Pictou, NS, it is a sister to Lady Janice II, which started life as Sealife No.1 in the same yard in the same year. Sea Life Fisheries (1988) Ltd is a division of Comeau's Seafoods, however it was a previous company that owned these boats during the original herring boom.
Comeau's is a large business and also has a ship repair facility in Saulnierville Meteghan, which includes a marine railway [edited]. When I was there last November, Sealife II was on the cradle. 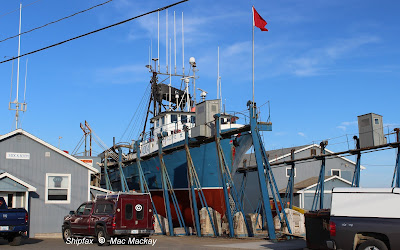 Most of the other comings and goings of the day took place in pouring rain, which is my excuse for not taking photos.

However the air cleared off somewhat for the late afternoon arrival of the "off again/on again" Canadian ship Qamutik. The ship dates from 1994 when it was built by Friesian Welgelegen at Harlingen, Netherlands for Spliethoff's. Named Edisongracht, it traded for them until 2008 when an arrangement was made with Umialarak Transportation for seasonal service to do northern supply work in Canada.  To be managed by Transport Qamutik In (Logistec) it would return to Spliethoff's for the remaining eight months of the year.
It was renamed Qamutik (translation: ice sled, also known as komatik) for the summers of 2008 and 2009. reverting to Edisongracht each fall. In 2010 it became Qamutik permanently, and is now bareboat chartered back to Spliethoff's in the off season without change of name. 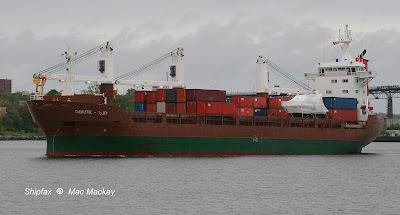 Amongst its deck load of containers, the ship is also carrying a shrink wrapped pleasure craft. Spleithoff's has a large business in transporting yachts.

Its arrival today was under the Dutch flag, but it is due in Valleyfield, QC, its loading terminal, later this month where it will hoist the Canadian flag again and sail June 21 for the north. 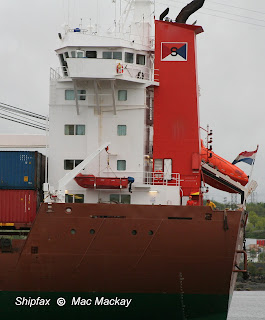 Still wearing Spliethoff's funnel marking and flying the Netherlands flag. Note the stern anchor, fitted for compliance with St.Lawrence Seaway rules, but also for anchoring in the north where there are no permanent harbours, and cargo must be lightered ashore.