This post is number 2000 since Shipfax began as a blog in 2009.  I am as surprised as anyone that it has lasted as long as it has, and I hope it is and will continue to be a reliable source of information and of decent photos of the day to day activities in Halifax harbour. The companion blog Tugfax supplements that somewhat but doesn't confine itself to Halifax quite so much.


It seems to me, having reached a milestone, it would be a good time to make a necessary change.

As I have hinted before I must begin to wind down Shipfax a bit to allow time for some other activities. It will become more of a weekly journal that a news blog, although I will certainly make a point of dealing with important events such as the much anticipated arrival of Atlantic Container Line's new G4 ship Atlantic Star early next week.

As of June 26, 2016 I will have been observing Halifax shipping for fifty years. A lot has happened since 1966. I could never have imagined even the concept of digital photographs, blogs and smart phones when I unleashed my crude Kodak 620 on the Halifax waterfront. That event took place July 5 when I snapped the departing Russian factory trawler Ambramtsevo. It is a tad worrisome that I remember that event like it was yesterday, but sometimes I'm not sure I remember yesterday quite so well. 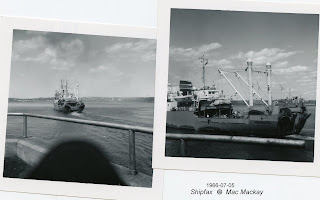 I had been taking photographs for about four years before that in Ontario and Quebec, but was never close enough to take pictures of moving ships. It took a little while to get used to that and to get the whole ship in the picture before it was too far away. (It took a little longer to keep my thumb off the lens and thanks to photo editing I can now straighten out all my horizons.)

For the fact  hungry, Abramtsevo K-7066 was built in 1965 by Volkswerft VEB, Stralsund, East Germany. It measured 2435 grt, one of the 90 ship strong Tropik class of factory trawlers of the Soviet Union. It was finally scrapped March 1, 1984 in Villanueva y Geltru (Vilanova i la Geltru in Castillian) in Spain.
Ambramtsevo is an artists colony founded near Moscow in the 1860s that promoted the purification of Russian art from western influences - it still exists today as a sort of park/shrine.
Abramtsevo the trawler was based in the Baltic port of Kaliningrad (former East Prussian Koenigsberg). It became part of the USSR following World War II, was renamed and its largely German population forcefully expelled. It was the westernmost part of the USSR and a major naval base.
Now surrounded by Poland and Lithuania, it is considered a Russian exclave, land access is only through NATO and EU countries, but it is still of strategic importance to Russia.

The ready availability of shipping information and data (such as all of the above) to anyone with internet access is another factor in my decision to cut back on this blog a bit. If you are curious, all this info is yours in an instant.

So thank you to all those who tune in daily to see what is going on. You may not see as much from now on, but you can always elect the Subscribe to: Posts (Atom) at the bottom of the page if you get bored with looking for news and not finding any. You will instead receive an annoying e-mail anytime I decide to post.

Thank you also for the many positive feed backs received over the past six years. I have enjoyed it at least as much as you have.

But stay tuned, it isn't over until it's over.