It was a bitterly cold afternoon in Halifax, with temperature at the -10C mark, with a very brisk breeze making it feel more like -20 something, as HMCS Fredericton got away from HMC Dockyard for a six month deployment with NATO. 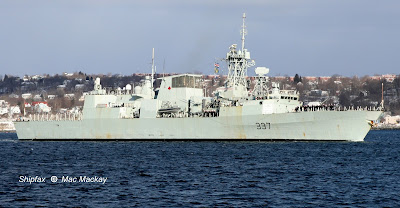 Fredericton wheels away from the Dockyard shortly after 1300 hrs AST.

This will be the ship's second posting to Operation Reassurance, a NATO response to the Russian occupation of Crimea, the first was in 2014. With NATO's SNMG2 it is expected to operate some of the time in the Black Sea.

The ship passed west of George's Island heading for sea.

Fredericton arrived in Halifax for the first time February 23, 1994 fresh from the builders in Saint John and was commissioned September 10, 1994. It entered the FELEX mid-life refit program at Halifax Shipyard October 6, 2011 and returned to the Dockyard January 2, 2013.

In its original pre-FELEX configuration, on a relatively balmy day in 1999.