There was very little activity in Halifax harbour today, with only one daylight arrival, and that was the regular caller NYK Demeter for Fairview Cove.

The offshore supply boat Skandi Flora was exercising in Bedford Basin, and trhe bulk carrier CSL Atlas remains at anchor there after arriving January 6. It bunkered soon after arrival, but has been idle ever since. 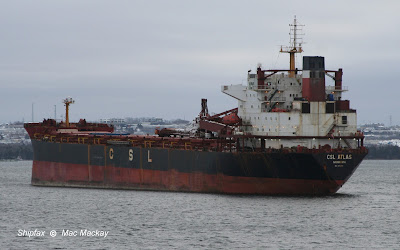 Anchored well up in the Basin off Prince's Lodge, the ship is showing signs of wear and tear.


Built in 1990 by Verolme do Brasil in Angrados Reis, it was the world's only Panamax self-unloading bulk carrier. That is no longer the case, and the ship is certainly beginning to show its age. One has to wonder, with CSL acquiring many newer ships recently, what is next for this once innovative ship. It has recently been been involved in transshipment operations in Africa and now appears to be awaiting orders.

For a more complete description of the ship see Shipfax April 27, 2011.

The only other action in the harbour was the installation of another new deck section on the Angus L.Macdonald bridge. After a hiatus of many weeks, work resumed again last night when workers cut out the old section. It was lowered to a waiting barge this morning and the new section raised into position this afternoon. 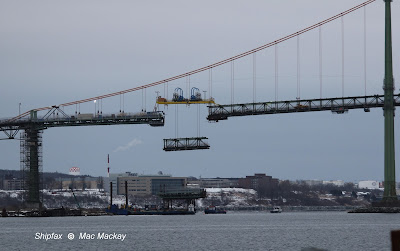 Workers lower an old deck section to the waiting barge where a new section is ready to lift. This is fourth section of the project which will install an entirely new deck over a period of a year and a half. The bridge will reopen again Monday morning.