The high speed catamaran tour boat Famille Dufour II arrived in Halifax last night at 8.5 knots instead of its cruising speed of 30 knots. 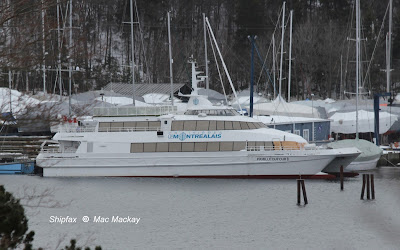 Built in 1995 the 340 passenger tour boat was intended to make speedy day trips out of Montreal and Quebec City to Tadoussac, QC, at the mouth of the Saguenay River where the Dufour family had acquired the Hotel Tadoussac, formerly owned by Canada Steamship Lines. The high speed cruise would also make stops on the way in such places as Ile-aux-Coudres, where the Dufours were based and started their hotel business. Riders were treated to majestic scenery and wildlife including whales.

Like most Ile-aux-Coudres families, seafaring and shipbuilding is a way of life, and following the design by Réjean Desgagnés, the Dufours built the boat adjacent to their hotel at Cap-aux-Pierres at the eastern tip of the island. Throughout its service the boat also wintered there, even though there is no dock and no port facilities. The boat and its fleet mates would approach shore at high tide where they maneuvered onto  wheeled cradles to be hauled up the beach. After spring maintenance the process was reversed and the boats took to the water once again.

Like all high speed vessels Famille Dufour II was intended to cover the high cost of fuel by efficient hull design, light weight and fast passages. In its first few years it certainly did that but as oil prices skyrocketed, the fast cruising was reduced and operations restricted to the Montreal - Quebec City range. Extensive renovations to the public spaces and the addition of a sun deck in 2010 made the boat more suitable to for harbour cruises with dining and entertainment. It has recently been marketed under the Crosières Le Montréalais banner. 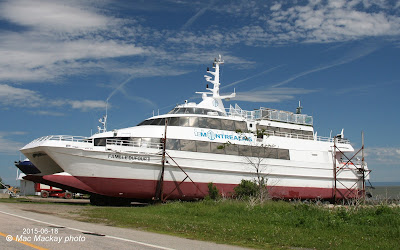 In June 2015 Famille Dufour II was fitted out and ready to go back in the water at Ile-aux-Coudres. The upper sun deck was added in the 2010 refit.

A shakeup in the St.Lawrence tour boat business in 2014 saw Croisières AML acquire the boats of several other operations and to re-assign their older boats to crewing duties in Newfoundland for the construction of the giant Hebron Gravity Base in Bull Arm.

AML acquired the Dufour boats and put Famille Dufour II on the market soon after. In December 2015 new owners Riverside Marine BC Ltd of Vancouver re-registered the boat in their name. A subsidiary of Riviera Marine of Brisbane, Australia, they  intend to operate a new service from the Vancouver Convention Centre to the Victoria Inner Harbour. The trip is expected to take only three hours, and at $80 provides a speedy alternative to float planes or BC Ferries. 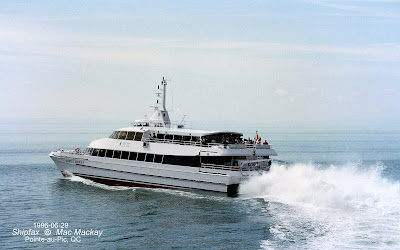 Rocket like acceleration from twin Hamilton water jets and 5600 bhp of Cat diesels, had the boat up to cruising speed in very short order. Top speed was 35 knots.

Famille Dufour II has no sleeping accommodation and is built for relatively sheltered waters, so its arrival in Halifax was on the end of a tow line. The one time Halifax based tug Point Vim (ex Foundation Vim) picked up the tow in Tadoussac, QC and made very good time towing at 8 knots or better since departing January 6.

The tug and tow arrived off Halifax late Saturday evening, and proceeded in to the Royal Nova Scotia Yacht Squadron on the Northwest Arm. Point Vim is certainly one of the rare commercial vessels to enter the Arm in many years, and certainly the first sizeable tug in decades. The Arm is almost exclusively a haven for pleasure boats and harbour tour craft. The occasional Coast Guard boat used to make an icebreaking or buoy laying trip, but that has not happened for many years. The last CCG ships I am aware of were Simon Fraser and Provo Wallis.

Point Vim is owned by Davis Shipping of Wesleyville, NL and has been upgraded and reconditioned and is in superb condition for a tug built in 1962. Under Davis ownership it has traveled widely towing the company barge and has been used for harbour tug work in St.John's. (It can be glimpsed in a photo of St.John's in Maclean's magazine this week.)

The next step of Famille Dufour II's trip to BC remains to be discovered, but my guess is a heavy lift ship will pick the boat up and transport it to its new home.

There are also numerous references to the tug Point Vim on the Tugfax blog, including this October 2011 post.The tug sailed from Halifax again early in the morning of January 10 and was well off to sea before sunup. 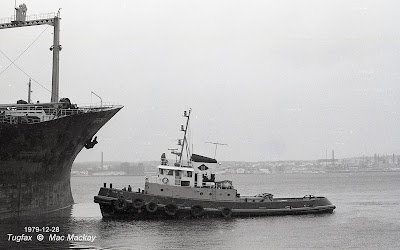 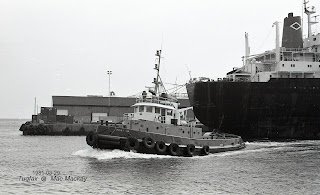 In March 1981 Point Vim had just completed berthing the bulker Canadian Highlander and was returning to base.
For twenty-five years these 1,000 bhp single screw tugs were the workhorses of Halifax harbour