Most of the shipping today was in Bedford Basin - although some of the ships weren't moving. 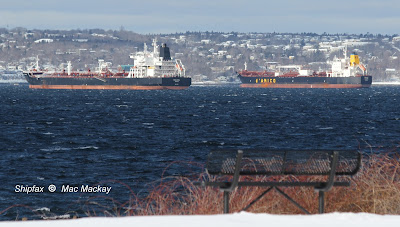 It was probably even colder than it looked, so this bench remained abandoned.

With two ship unloading at Imperial Oil, there was no room for more, so two tankers were anchored in the Basin waiting their turns.

High Sun arrived January 17. The Maltese flagged tanker, owned by d'Amico Tankers' Dublin, Eire branch, is relatively new, dating from 2014 . It looks like a typical Korean-built handysize, but it was not built in Korea. However it came from the joint venture Hyundai-Vinashin Shipyard Co in Ninh Hoa, Viet Nam.

Torm Astrid arrived today, but is not painted with Torm's usual burnt orange superstructure. It was only acquired by Torm in 2015 after serving Overseas Maritime Services since 2012 as Maxwell Bay It was launched as Meriom Lily in 2012 by Guangzhou International in China.
The ship arrived from Paldiski, Estonia, showing the great lengths Imperial Oil will go to for product.

Originally planning to go in to Fairview Cove directly on arrival, Atlantic Star, on the return leg of its maiden trip, was forced to go to anchor when Atlantic Conveyor did not get away on its scheduled time. 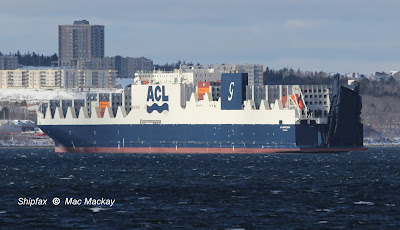 Lightly loaded on its eastbound trip, Atlantic Star sits high in the water.

This may be the first time the ship has anchored. It did not get into the Ceres terminal until nearly 2100. 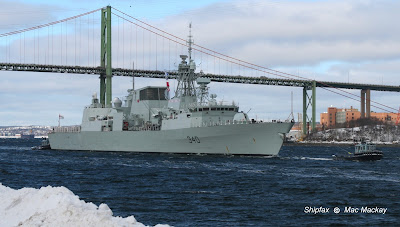 HMCS St.John's returned from the Basin in a cold move, under control of three navy tugs. (A Glen tug is not visible, stationed on the ship's port quarter.) It is always amusing to see the pup tugs giving the impression that they are doing all the work. Granville on the bow and Merrickville on the stern were working hard nonetheless. 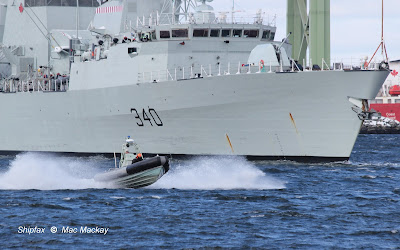 RHIB #29 had just carried out a personnel transfer under the MacKay bridge and was returning to HMC Dockyard. With a temperature around -6C it was cold enough, but the bowman had to withstand 30 knot winds - his was probably the least desirable job on Halifax harbour today. 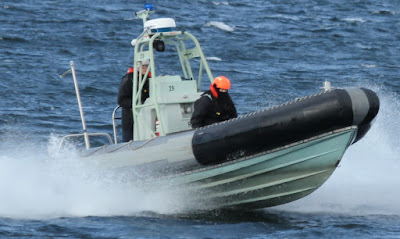