With little shipping activity to view, a trip around Halifax harbour today still revealed a few itrems of note.
At around 1635 this afternoon a fire broke out at a building on the grounds of the Bedford Institute, close to dock. At first there was rapidly rising black smoke, typical of fire fueled by a source such as an oil tank. Within ten minutes or so it appeared that the fuel had burned off and the smoke became whiter as portions of the building began to burn.

From the Halifax side of the harbour the fire appeared to be contained in a single storey building not connected to the main BIO complex. It also did not appear to threaten any of the ships that were alongside.  Fire department resources were called in from around Dartmouth and from Halifax and soon extinguished the fire. 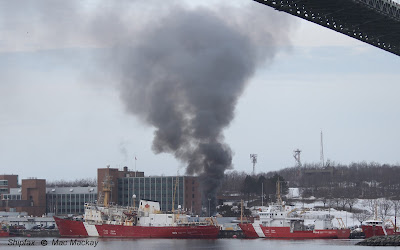 Hard by the MacKay bridge, the fire sent up a plume of jet back smoke at first. CCGS Hudson, CCGS Matthew and CCGS M.Perley were near the fire but did not appear to be threatened.

Meanwhile at HMC Dockyard, HMCS Athabaskan* was still boomed off today after a fuel spill January 22.  The ship was fueling from HMCS Preserver (now a sort of navy filling station, that does not go to sea) when about 800 liters escaped. 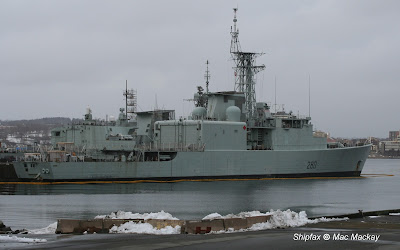 Canada's only active destroyer, Athabaskan* is soon to be retired and has suffered a litany of problems in recent months.

The spill was mostly contained in a boom and was cleaned up quickly, but no cause has been revealed. It appears that the problem was aboard Athabaskan* and it has been incarcerated until fixed.


* Except for the fact that the photo shows Iroquois most of the above is true. Iroquois has been decommissioned and was apparently moved to this jetty recently as part of a shuffle of ships within the Dockyard. Athabaskan is elsewhere and my not be boomed off at all.