BBC HAREN - a question of timing and luck

No sooner had Halterm announced the impending acquisition of some new shoreside equipment to the tune of $4.5 mn than they had a container crane failure while unloading the ship BBC Haren. 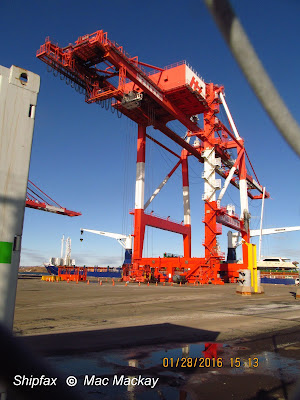 Container spreader on the ground and slack wires - a sure sign of trouble.


On Tuesday Halterm said they will acquire 3 front-end loaders, 8 intermodal tractors and 5 RoRo terminal tractors in the second Quarter of this year. 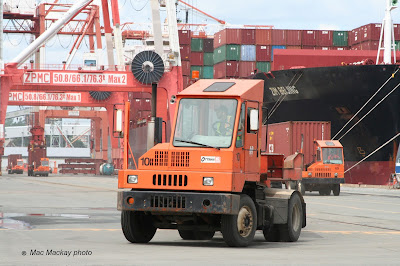 Some Halterm gear is getting a bit ragged. [file photo] 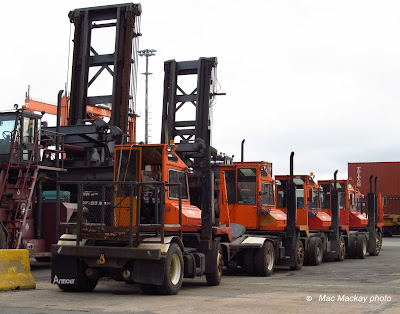 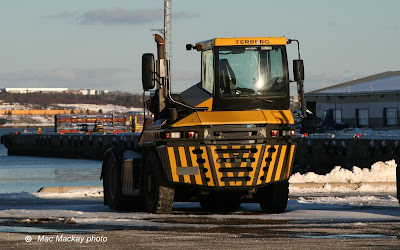 Perhaps the new tractors will be like this Terberg demonstrator parked at pier 29 recently. It has the dealer's sticker NC Nielsen on the windshield. Terbergs are built in the Netherlands, and Nielsen is from Denmark.Note the rotated driver's seat that allows for better visibility for backing.

Halterm has already spent an undisclosed amount refitting the number one (southernmost) crane on Pier C during the past year, but it malfunctioned today and had to be removed from service. The other three cranes on Pier C were working on Zim Luanda and it wasn't until after 1530 that the number 2 crane could be moved into position to work BBC Haren. 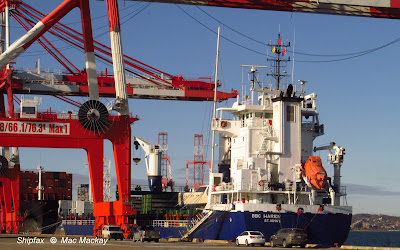 The second crane in line moves into position after finishing work on the Zim Luanda. The slack wires are sagging from the number one crane's boom. The government inspector's grey car is parked astern of the ship.

Fortunately it does not appear that there was any damage to crane, ship or cargo but the cargo was a high hazard one and perhaps they were lucky. Also the ship is a small one, with a small quantity of containers to unload, so it was not held up for a  long. The tank/containers were plastered with radioactive warning labels, and there was at least one government inspector on board the ship taking photos. 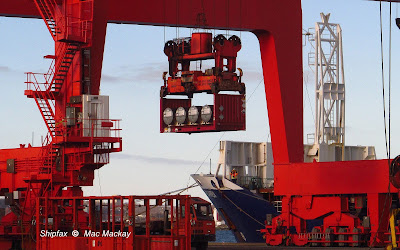 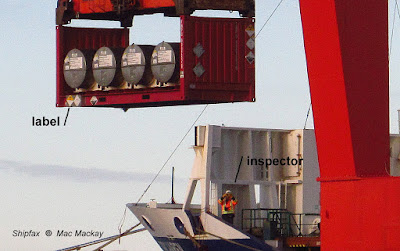 BBC Haren is a member of the large BBC Chartering (Briese Schiffahrts) fleet of Haren (Ems), Germany and flies the Antigua and Barbuda flag. Built in 2010 by Damen Yichang (the Dutch company's Chinese  shipyard) as Beluga Loyalty, it was renamed BBC Haren  in 2011. It then dropped the BBC and sailed as Haren from 2012 to 2015 before adding the BBC again. A multipurpose ship of 7878 grt, 11,000 dwt, it carries two 80 tonne cranes that can perform a combined lift of 160 tonnes. It has a container capacity of 671 TEU, has box shaped holds and pontoon type hatch covers that are handled with a traveling gantry.


The bespoke logistics company Peters and May Group, specialists in race car, superyacht, and boat tranport have reserved space on the ship. Although it is too late for you to send your yacht south from Halifax there is still space from Port Everglades to Antigua and Saint Thomas after the Key West Race, but in time for the RORC600. 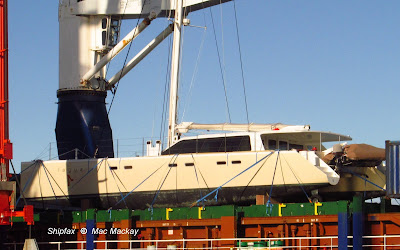 The ship was carrying one boat on deck - completely rigged and ready to sail away once it is offloaded in warmer waters. Lagua is an Italian catamaran motorsailor en route from the Med to the Carib for the season.