Atlantic Star will remain in port overnight January 6. Although it was still working containers late in the afternoon, the stern ramp was in the up position. This is most unusual since it is usually left down until the ship is ready to sail.
I have once learned that there is a mechanical problem with the ramp itself. I noted when the ship was inbound that an alarm was sounding from the stern of the ship in the area of the car deck. On tying up it was discovered that they could not lower the ramp. A new ship teething problem no doubt, but most inconvenient nevertheless since there is usually a lot of RoRo cargo for Halifax. 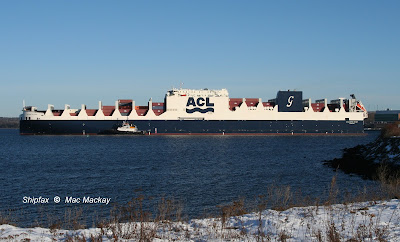 Atlantic Star gives a broadside view as it emerges from the Narrows into Bedford Basin.  The Seaview Point buoy is forward of the tug.


The ship's overnight stay resulted in fleetmate Atlantic Cartier going to anchor until morning, since the other berth at Fairveiw Cove was occupied by NYK Delphinus. Now we will see the old and new tied up together tomorrow.

HMCS Fredericton's send off from HMC Dockyard on Tuesday January 5 was ceremonial only. Although the ship went to sea it returned to port to transfer personnel and worked the dynamic sound range inside Meagher's Beach. It was in and out again several times during the day Wednesday and into the evening transferring personnel back and forth.
The ship never tied up at the HMC Dockyard, but instead transferred people and perhaps parts and pieces - by small boat. 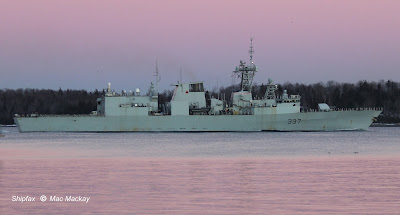 HMCS Fredericton scoots out of harbour at dusk Wednesday - one of several arrivals and departures since its official sailing. Its gun barrel doesn't have the same jaunty angle it had on departures, so perhaps there were some firing exercises at sea too.