The much traveled Atlantic Progress arrives Friday morning for Nirint Shipping. To my knowledge it is the first time the ship has called in Halifax, but it has operated in this area under six different names.
It was built as Atlantic Pride by Jianjiang Shipyard in 2000, and the next year became Seaboard Rover before reverting to its original name in 2002. In 2005 it became Seaboard Chile II for another two years. In 2007 it took up a charter with Fednav as Federal Pride. Under that name it was a frequent sight on the St.Lawrence and into the Great Lakes carrying break bulk and bulk cargoes.
Then in 2010 it was sold by original owners Pontium Pro Nav Panama (managed by Athena Marine Co Ltd of Limassol) to Intership Navigation Co Ltd, also of Limassol under the management of Hartmann Project Lines of Germany.  From 2010 to 2013 it carried the name HAL Pride. It then adopted its current name.

I first saw the ship on the St.Lawrence River as Federal Pride. 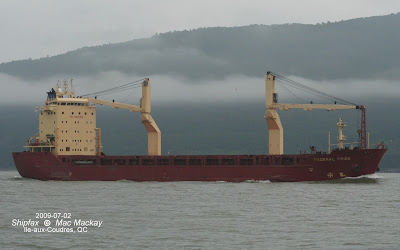 As Federal Pride, downbound on the St.Lawrence with a full cargo in 2009.

The ship measures 12,993 grt, 17,541 dwt and has two 45 tonne cranes serving three holds. It has portable tween decks which can be stowed on deck when not in use, and can accommodate 984 TEUs, including 30 reefers. For Nirint, it is arriving from Cuba with bagged nickel sulfides and containers.

In 2008, upbound on the St.Lawrence in ballast with its portable tween decks stowed on deck just forward of the deckhouse.


Part 2
At sunup this morning the ship was alongside with cranes rigged and ready as soon as Canadian Border Services completed their inspection. A string of gondola cars on the pier were ready to take some of the cargo. 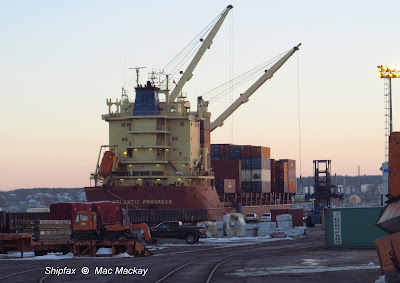 The ship has a large deck load of  containers. The ship's designers had this kind of versatility in mind, and specified the cranked crane bases to clear the large hatch cover fit between the container stacks. 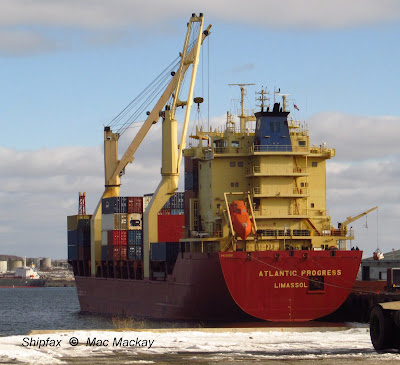 By early afternoon cargo work was well along and the crew was taking on stores using the small stores crane mounted on the stern.

The ship will sail this evening direct to Rotterdam. (Some Nirint ships call in Matane, QC on the return leg.)