After the New Year's Day holiday, activity ramped up again in the port as ships were arriving at all the main centres of operation.

The first ship of the year for Cerescorp's Fairview Cove container terminal is the 5041 TEU Allise P for the G6 Alliance. It arrived just as the sun was coming up and berthed at the east end of the pier. 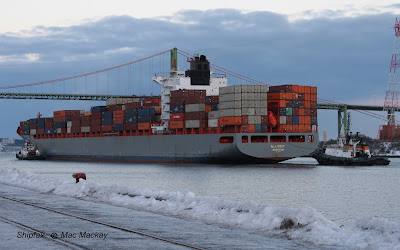 Built in 2007 by Hyundai, Ulsan, it is a 53,481 grt, 53,900 dwt ship and worked under charter to Maersk Lines as Maersk Dubrovnik until 2014. It then reverted to owners Stefan Patjens Reederei GmbH. It has been calling in Halifax for almost a year, with its first call on February 17, 2015. 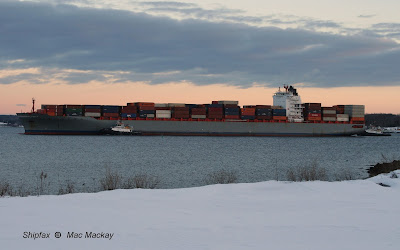 The second arrival a few hours later was a new ship to Halifax. Rio Blackwater is also on G6 service and is also German owned, by Ahrenkiel Steamships Gmbh+Co. It was built in 2000, also by Hyundai, Ulsan and is a 5551 TEU ship of of 65,059 grt, 68,121 dwt. It started life as CSCL Shanghai and became MSC Shenzhen in 2008, Rio Blackwarter in 2010 then Buenos Aires Express later in 2001 . It became Rio Blackwater again in 2015. It has also worked for OOCL and only two weeks ago was listed on Maersk schedules in the Suez Canal, so it is really a jack of all trades. 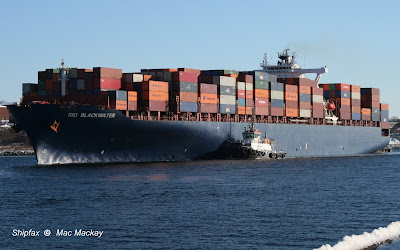 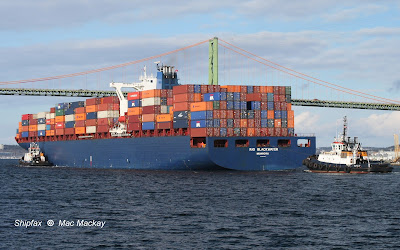 Autoport's first arrival of the year is Procyon Leader or NYK Line. The 52,581 grt ship built in 2000 by Tsuneishi, Numakuma is one of more than 120 such ships in the NYK stable. NYK does not publish a fleet list with ship's capacities, but this one would certainly exceed 5,000 autos. 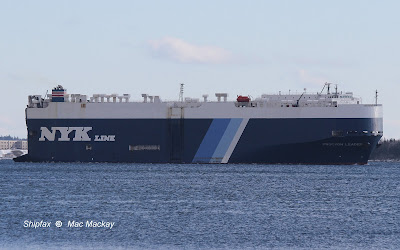 Halterm was the busiest spot hosting three ships. Zim Savannah and Maersk Penang arrived before sunup, and CMA CGM Bianca waited offshore until it was time for Maersk Penang to sail. It was not terribly prompt in doing so, and after boarding its pilot Bianca inched its way. When Penang finally got off the berth it took the western channel outbound to give the big ship room in the main channel. 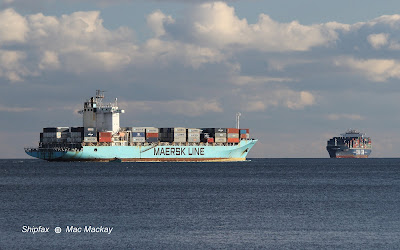 Maersk Penang begins its swing into the western channel (passing a lobster boat) as CMA CGM Bianca is finally able to head inbound.

CMA CGM Bianca dates from 2011 when it was delivered by Shanghai Jiangnan Changxing Heavy Industry Co Ltd. It has a capacity of 8530 TEU (including 700 reefers) with a gross tonnage of 90,500 and deadweight tonnage of 101,433. As such it is typical of the size of ships on the Columbus loop. The ship is owned by Danaos Shipping Co Ltd of Piraeus and flies the Maltese flag on its charter to CMA CGM. 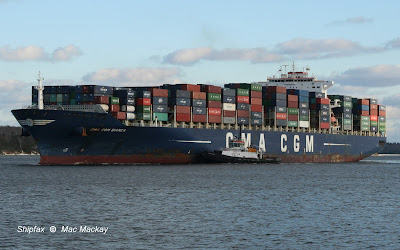 Due to its later than planned arrival, the ship will be working well into the night to discharge its cargo, since the newer and larger Halterm cranes are occupied with Zim Savannah at pier 41. 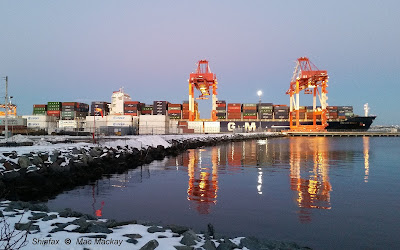 The truly mammoth size of these ships- and still very far from the world's largest - can really be appreciated in a wide angle view, such as this one taken from my smart phone.