The first of five new fourth generation (G4) ships for Atlantic Container Line made its Halifax debut this morning. (The large letter G on the funnel casing stands for the Grimaldi Group, owners of ACL since 2007.)

Built by Hudong-Zhongua in Shanghai, the 100,530 grt Atlantic Star sailed into Halifax in broad daylight to tie up at Fairveiw Cove for the first time. Its predecessors of the G3 class have been the most dependable sights in Halifax harbour since the mid 1980s, and so ships of this class will eventually become commonplace, but the startling appearance of this first one will not soon be forgotten. 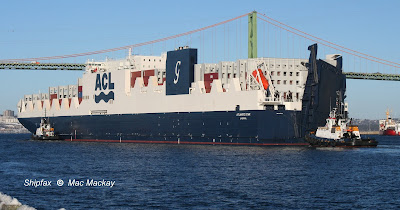 At 296m over all length, 37.6m beam and 11.5m maximum draft, it has been specially designed to serve the same ports as as the G3s, but with an impressive increase in capacity. 3817 TEU (versus 2908), 1307 cars (versus 1000) and 28,900 m2 of RoRo space (versus 18,500) are among a few of the statistics which single out these ships. The G3s were already the world's largest ConRos (ships with CONtainer and ROro capacity), but these represent a huge leap ahead. All this is done with a decrease in crew size from 21 to 16 and a reduction in fuel burn to 70 tonnes per day from 75 tonnes per day. One figure of note its that it has the economies of scale of a 6500 TEU container ship but with lower operating costs.

Containers are stowed on deck in huge fixed cell guides, which should ensure that ACL maintains its record of never having lost a container overboard. Seven fixed and four hoistable car decks with a maximum deck height of 7.4m and a 420 tonne capacity stern ramp will allow it to carry an even broader rage of wheeled, oversize and heavy cargoes, ranging form cars, trucks, buses and construction equipment to aircraft components, wind farm devices and all range of manufactured goods and machinery.

The four remaining G4s to be named Atlantic Sail, Atlantic Sea, Atlantic Sky and Atlantic Sun will be phased into service over the coming year, as the remaining G3s are phased. There will be an interesting event this evening as Atlantic Star sails and Atlantic Cartier arrives on its eastbound leg. The passing will occur after dark, preventing a photographic comparison.

Since its founding in 1965 by five leading European shipping companies ACL has always carried a mix of containers and RoRo, and was one of the early container lines to call in Halifax and the first RoRo service. But before that they serviced the Volvo assembly plant in Halifax. 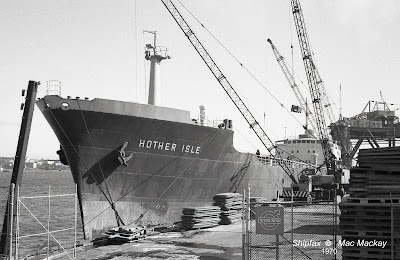 Hother Isle was converted from a cargo shisp to a container ship in 1968-69 and serviced the Volvo assembly plant for ACL for a short time until the first generation of ACL ships began to call in Halifax in 1970. 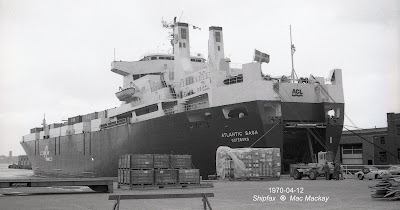 The G1 ACL ship Atlantic Saga unloads at pier 36 in 1970. A Mafi trailer at left and a yard tractor, some special steel pallets for Volvo, and a Triumph TR3 I believe, were typical RoRo cargos of the day.

The first Atlantic Star initiated RoRo service to Halifax March 3, 1967 with 200 Volvo car "kits" for assembly in Halifax and 200 completed cars for the US market. It was lengthened in 1975 (with hull blisters or sponsons added for strength) and was finally broken up in 1987.

Atlantic Song, another of the G1s after it was lengthened approaches Halterm. 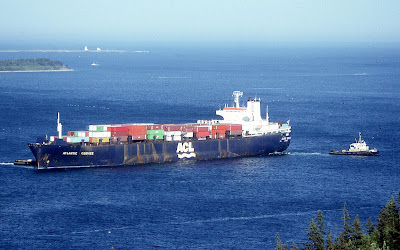 Atlantic Service, built as Atlantic Span, was the first ever ConRo ship when it was built in 1967. On July 24, 1987 it lost power while approaching Halifax and drifted aground off Sandwich Point (below York Redoubt). It was not severely damaged, but headed off the scrappers in November of that year. 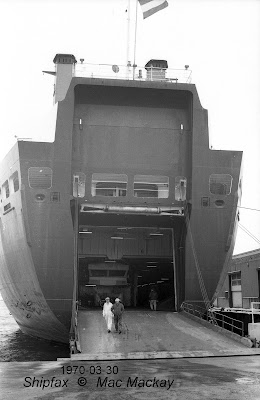 The first Atlantic Star's stern ramp was an impressive sight in 1970, but fades in comparison the current ship's massive stern portal, which I doubt I will able to photograph. 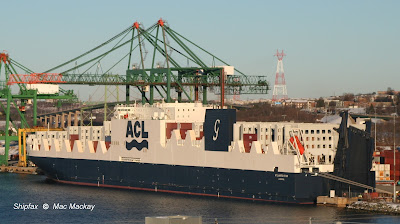