The last arrival of 2016 was a Canadian ship (of sorts). My plans for a photo of its mid-afternoon arrival  "gang aglay" as Burns put it, but I did manage a late afternoon photo after it tied up at Fairview Cove. 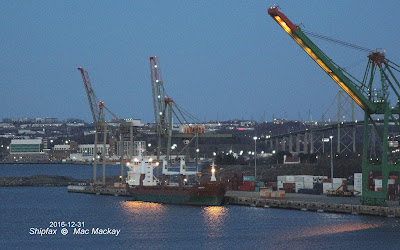 Since the holiday had already started there did not seem to be any work going on, however there were some large crates sitting pierside just forward of the ship.

The ship is called Mitiq and it operates seasonally - June until the end of October - for Nunavut Eastern Arctic Shipping, doing northern supply work out of Valleyfield, QC, making two or three trips each year.
Logistec of Montreal through Transport Mitiq Inc under Canadian flag.
The rest of the year it trades world wide under the Netherlands flag for Northern Bear Shipping BV a subsidiary of Spleithoff's.
The ship was built for Spleithoff's by Frisian Shipyard in Harlingen, Netherlands in 1995 as a general cargo ship of 8448 grt, 12,760 dwtr. It carries three 60 tonne cranes and has 17 removable pontooon type tween decks.
Its original name was Emmagracht, which it carried until July 2013 when it arrived in Valleyfield for the first time to load for the north. It was renamed Mitiq at that time. [Mitiq means the common eider duck in the Inupiaq language] 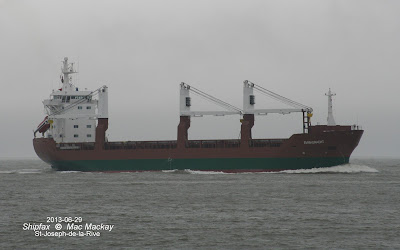 Emmagracht sailing up the St.Lawrence June 29, 2013 en route to Valleyfield. 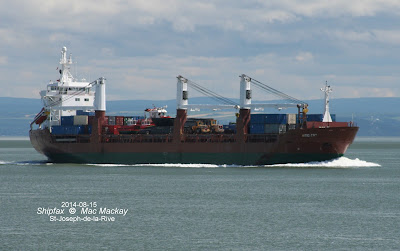 Returning from its first northern trip in 2014, the ships deck is loaded with containers, machinery, and three tugs and small barges used to lighter off cargo at remote ports.

It has followed a similar pattern each year since but has continued to carry the name Mitiq. After reverting to Netherlands flag November 1, 2016 it returned to Europe and has now arrived from Liverpool, UK. Since Liverpool is an ACL port, it is possible that it is carrying some project cargo for them.