Shipfax was beset in the space of a few days last week, but has now overhauled most of its rigging and has resumed its course. What happened in the harbour was noted but not photo'd  observed, but there is still left over info from the previous weekend.

It sailed April 8. Although the AIS shows its destination as Belledune, NB, that is clearly not the case since it headed south.
* with a grt of 23456 it should have a dwt of 34567!

Sailing April 1, the cargo ship Saimagraacht made its second call this year, on what has become a regular service for Spliethoff's.
Built in 2005 by Szczecinska Nowa in Poland the 18,321 grt, 23,660 dwt ship has side loading doors and enclosed elevators specifically for forest products, but as on this trip she was also carrying a few containers on deck. She can carry 1273 TEU. 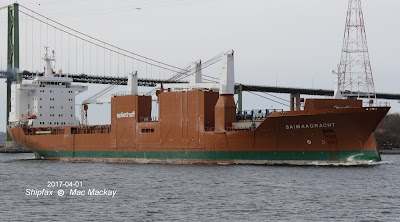 The ship is also retro-fitted with an exhaust gas scrubber system (and none too elegantly either)  - which like most of those installation smokes like an old stogy. Nothing like removing SOx and NOx and leaving a trail of particulate. 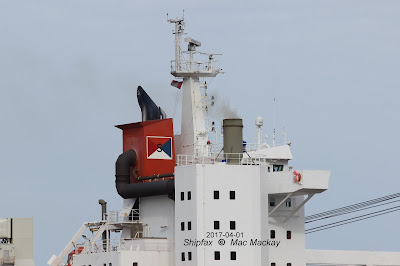 The Frankenstein version scrubber system was added after the ship was built.

Also sailing on April 1, the CCGS Alfred Needler on temporary winter assignment to work out of Halifax, the research trawler headed for the Gulf and Argentia. 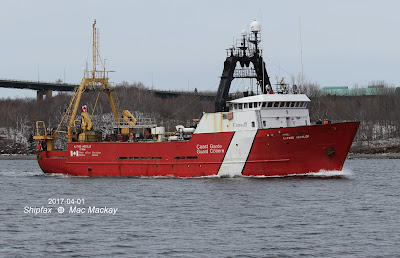 The ship was built in 1982 in Pictou and based in Halifax. After an engine room fire in 2003 it was laid up, but then rebuilt and transferred to Newfoundland,replacing sister ship Wilfred Templeman when it was retired in 2011.
Three replacement ships (one for the west coast) will be built by Seaspan as part of the National Ship Procurement program now under way. 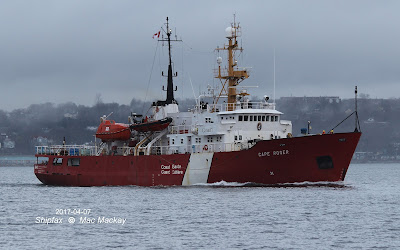 The veteran Newfoundland based offshore patrol vessel Cape Roger sailed on another of its frequent patrols. It works out of Halifax in winter (February to April) then returns to Gulf and Newfoundland waters.
Built in 1977 by Ferguson Industries Ltd of Pictou it was modernized in 1996 at Shelburne, and wintered over in St.Catharines, ON 2010-2011 where it was refitted at the Port Weller drydock. At that time its flight deck was decommissioned and hangar removed.
Construction was well underway April 1, 1976 when fisheries minister (and later Governor General) Roméo LeBlanc announced its name and spring 1977 delivery. This year is its 40th anniversary.
A later vessel of the same basic design and class is CCGS Cygnus, built in 1982, and distinguishable by its full width all weather bridge and some smaller details such as mast placement. It is alo based in Newfoundland.


The big cable ship Dependable got underway for a cable repair job off Nova Scotia. It arrived April 6 to load cable for the work. Followng that job it will return to its normal base of Baltimore.

Dependable arrives in misty weather. The davit forward of amidships is used to deploy a buoy to mark one end of a severed cable while the ship goes off to retrieve the other end.

Built in 2002 the ship is one of six sisters operated by TE-Subcom (formerlyTyco) world-wide. Some of the sisters, including Reliance and Responder have worked out of Halifax in the past. 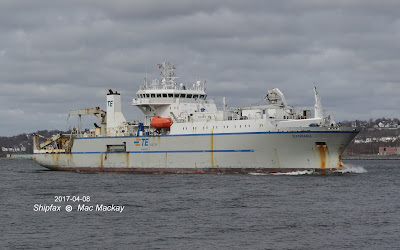 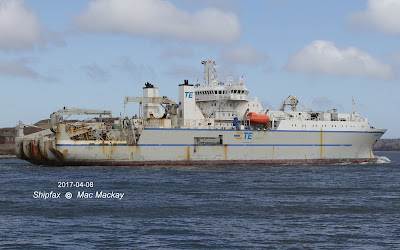 There is also a gantry (here in the stowed position) that can be hoisted out over the stern to deploy is trenching plow. 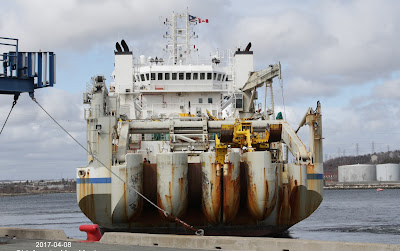 The blue structure at left is the shoreside cable loading conveyor.

The usual run of  "car boats" visited Autoport during the week. However Wilhemsen's Toscana unloaded a large quantity of wheeled material and odd loads at pier 31, before shifting to Autoport. 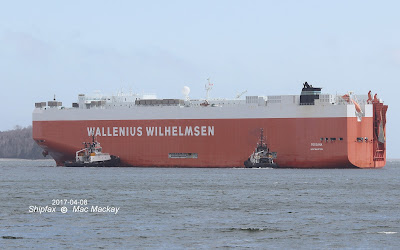 Built in 2009 by MHI Nagasaki Shipyard and Engineering Works, the 61,328 grt ship can carry 6542 cars.
Odd loads? How about a shrink wrapped helicopter?

It was transferred from its Maafi trailer to a highway trailer today, ready for the next leg of its trip.


There was early morning activity in the harbour as the small chemical tanker Lutsen prepared to sail after taking bunkers overnight.

A.P.A. No.1 takes the pilot out to the departing Lutsen at number 2 anchorage, as Toscana unloads at Autoport.

Lutsen was built in 2006 by Samho Shipbuilding Co Ltd in Tongyong as Songa Diamond. It weas quickly renamed Brovig Bay, then in 2007 it became Liquid Velvet and Ben. It was renamed Lutsen in 2016. Measuring only 8,450 grt and 12,901 dwt, it is small by contemporary standards.  It headed for Montreal. 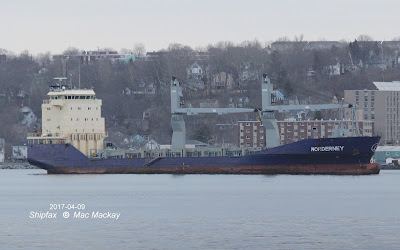 At pier 9c work began to fit the ship with prefabbed cable tank components. This is a regular activity at the pier, with several ships fitted with the steel frames in the past few years. 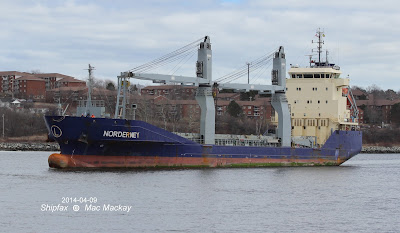 Built in 2012 the ship measures 4591 grt, 5475 dwt. It flies the Antigua and Barbuda flag for German owners. It carries a pair of what appear to be 40 tonne cranes, serving box shaped holds.

Container traffic continues apace with several new faces, but some familiar ones too.


OOCL Kaohsiung a 5888 TEU (including 586 reefers) ship built in 2006 by Koyo Dockyard in Mihara, is operated under OOCL long term charter by Nissen Kaiun Co Ltd.

Where it will go when OOCL finally leaves the G6 Alliance, will be interesting to see since larger ships are displacing "old post Panamax" ships in large numbers.