Having established a reliable internet connection in Quebec I am now able to post at will. I won't be posting every day, but today's superb weather made for some good photo opportunities.

There were many ships in the river today, and with an incoming tide late in the afternoon, lighting was ideal. At my location about 90 miles northeast of Quebec City, most ships time their upbound trips to take advantage of a knot or two of rising tide. This may not seem like a lot, but the alternative is to fight a falling tide, which can be considerably stronger, especially at pinch points like Ile-aux-Coudres and Quebec City.

First upbound that I caught was NCC Noor, a 29,163 grt, 45,565 dwt mid-range tanker of the National Chemical Carriers fleet of Saudi Arabia, now part of the "Bahri" brand. Nevertheless it flies the Panama flag.

It was built in 2011 by SLS Shipbuilding Co in Tongyeong, South Korea.

Next along was the Wagenborg ship Aragonborg. Its destination was the nearby wharf at Pointe-au-Pic, where it will be paper for export to Europe. Royal Wagenborg is one of the prime forest product carriers. 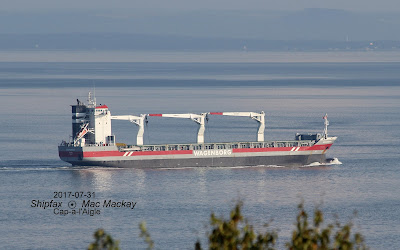 It was built in 2010 by Hudong-Zhonghua in Shanghai and measures 11,885 grt, 17,294 dwt. It has moveable tween decks and three 60 tonne cranes. After a few days loading paper from the Resolute mill in Clermont, it will sail to Baie-Comeau to take on more. 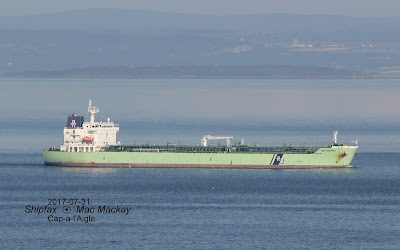 The distinctive hull colours of BW Tankers from Singapore certainly sets them out from the rest. BW apparently stands for Bergesen Worldwide, a name adopted by World Wide Shipping (of Hong Kong) when it acquired Bergesen of Norway. It is presently has the world's largest fleet of VLCCs.

The last upbound in daylight was Algoma Integrity. After a lengthy winter layup in Montreal it has only recently resumed service carrying iron ore from Port-Cartier to Contrecouer in a constant  shuttle service. 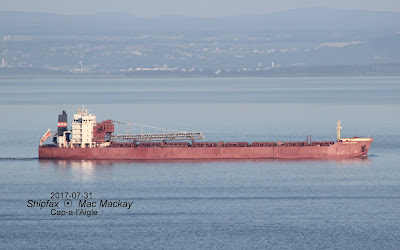 The former Gypsum Integrity to 2015t it was built in 2009 to sail from Hantsport, NS, but that was a short-lived job. After US Gypsum shut down its mine nearby the ship was chartered out and eventually sold.
Built in Rio de Janeiro by EISA-Ilha it measures 33,047 grt, 47,701 dwt.