Since New Year's day is a holiday for longshoremen, it is usually fairly slow for commercial shipping and today was no exception, with only one arrival and one departure. For many years I have been  taking New Year's Day to search out every identifiable vessel in Halifax Harbour. When I scout the backwaters and coves I usually come up with about 70 names, excluding pleasure craft and fishing boats.

This year did not turn up anything very unusual, but it did take me places I don't often go.

Wright's Cove is an area on the southeastern corner of Bedford Basin, below the Burnside Industrial Park, and includes Navy Island Cove, home of one of the few remaining steel side trawlers of the 1960s. 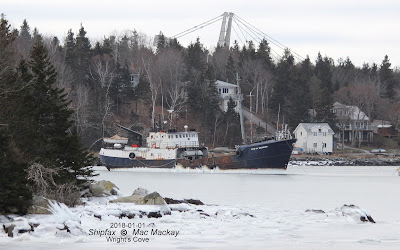 Hydra Mariner, the former Cape Mira was built in George T. Davie+Son in Lauzon (Lévis), QC and launched May 27, 1963. Its sponsor was Judith Smith, daughter of Ronald G. Smith, one of the founders and head of National Sea Products. The boat began fishing out of Louisbourg in October of the same year. In 1976, following the upheaval in the Newfoundland fishery, it was moved to Natlake and worked out of Burgeo. Eventually it returned to National Sea and was converted to a scallop dragger working out of Lunenburg.
In 2001 it was renamed Hydra Mariner with a plan to convert it to a "chase boat" for seismic operations. I suspect this never happened and the boat kicked around various berths in Halifax for several years. In 2009 it found its spot in Navy Island Cove and has not moved since, except for a brief excursion in February 2014. It parted its mooring lines and drifted ashore, but was soon refloated and resecured by the RMI Marine tug Belle-D.. There does appear to be some activity on board from time to time, in the summer, perhaps as a sometime liveaboard/summer camp. It is now considered to be a "yacht".

At the other end of the harbour, at Eastern Passage, the above mentioned RMI Marine has its base.

Its tug Belle-D and one of its landing craft and two dive tender /workboats await the next assignment. 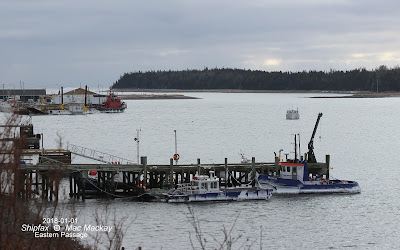 In the background, at the government wharf, the former Province of Nova Scotia cable ferry LaHave 2 and the former HMC Dockyard fire boat Firebird sit idle.
The ferry has been fitted with spuds and has been used for a variety of construction projects since 2010 when it was acquired by Municipal Enterprises. The fireboat on the other hand has not found a new occupation since it was sold as surplus last year.

Just to the north is the Valero dock, (also known as Ultramar, and the former Gulf Oil refinery dock.) It sees very little tanker traffic, but is home to the barge John P. Oxley. 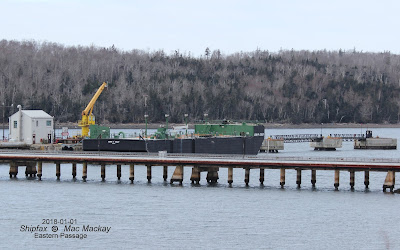 Built in 2001 by les chantiers Verreault in Les Méchins, QC, it  is a pollution control and oil recovery barge, operated by the Eastern Canada Response Corp.(ECRC). Since its arrival in tow of the tug Océan Foxtrot on Christmas Day 2001 it has left port only once, for refit in Shelburne, NS in 2011.


One of the only working parts of the harbour today was Autoport where another car carrier was busy unloading. Hoegh Sydney arrived yesterday just after Viking Queen departed (see previous post) 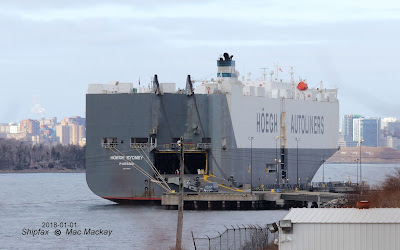 The Japanese shipbuilders Tsuneishi, built the ship at their Cebu yard in Balamban, Philippines in 2007. It carries 5400 autos and measures 51,7631 grt, 17,311 dwt. Operators Hoegh Autoliners is majority owned by the Leif Hoegh group with Maersk as a minority shareholder at 38.75%.

One of the more colourful spots in Halifax harbour, now partly concealed by the King's Wharf development, is the home of Dominion Diving in Dartmouth Cove. 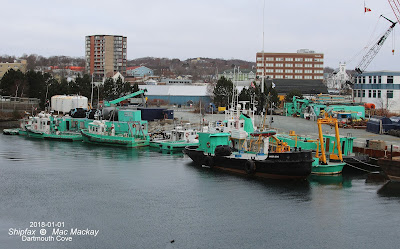 Its fleet of nine workboats and several scows and barges all wear the unique company colour. Located at the mouth of the Sawmill River (which is being daylighted), the recreation of a portion of the Shubenacadie Canal's inclined plane, and the cconflunece of the Shubenacadie Trail and the Trans Canada Trail, one has to wonder how long this prime site will  be able to hold out against the inevitable pressures of development.

As mentioned above, there was very little commercial activity in the harbour. Oceanex Sanderling arrived early at Halterm  pier 41 but appeared to be taking a day off.

At Imperial Oil the Torm Louise completed unloading and moved out to anchorage number 1 to take on bunkers. Once that operation was completed it sailed for Sept-Iles, QC. [Later info: the ship is instead headed for Quebec City.] 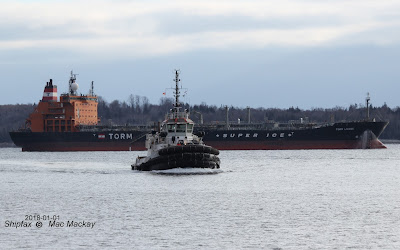 Atlantic Bear (see Tugfax) returns to base after assisting Torm Louise to move off Imperial Oil dock #3 to nearby anchorage to take on bunkers.

Of typical Mid-Range size - 29,283 grt, 49,999 dwt, it is markedly different from the Korean built tankers we usually see. It dates from 2009 and Guangzhou International, in Guangzhou China, and is one of Torm Lines' Super Ice class. Its heavy bow and full width bridge are sure indicators that it was built for harsh weather.

There was also activity at the Coast Guard Base at Bedford Institute. The patrol vessel CCGC Corporal McLaren M.M.V. sailed early in the afternoon, but did not get far before returning to base. It was destined to Cow Bay where a whale stranding was reported. However the whale was "refloated" and lead back out to deep water in very short order by a group of hardy volunteers. 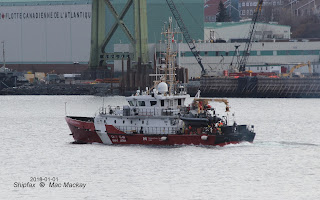 Corporal McLaren M.M.V. outbound, but soon to turn back. The new pier at HMC Dockyard is taking shape in the background. 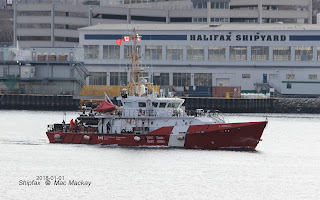 That was not the only CCG activity. CCGS Sir William Alexander arrived earlier from the Sydney area, well encrusted with ice, and carrying a very icy buoy on deck. 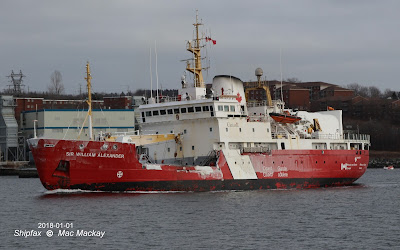 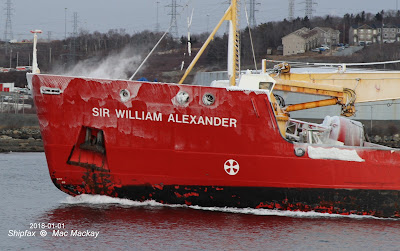 Streams of vapour were blowing off her forepeak as ice melting was underway prior to tying up at BIO about noon time. The ship had obviously been in the ice recently as the wear on her boot topping indicates.


Another far reach of Halifax harbour, well outside the normal confines of the port, is at the harbour's entrance. Sambro is home to numerous fishing vessels and is the base for the lifeboat CCGC Sambro. 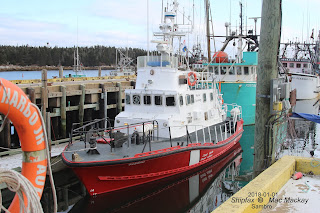 One of ten Arun class boats in service with the CCG, it was built in 1996 by Hike Metal Products, in Wheatley, ON and is due to be retired. Its replacement, Pennant Bay is currently undergoing trials and training in Dartmouth and will soon be in service. That Sambro was not tied up at her normal dock may signal that this move may be very soon.

Nearby at Sambro Head, Canadian Maritime Engineering operates the former Brenton Gray's boatyard.
Currently it has the harbour tour vessel Silva on the cradle for refit. 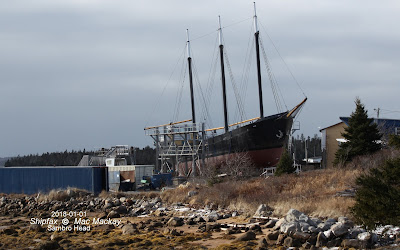 Silva (whose official name is Silva of Halifax) dates from 1939 when it was built as a three masted trading schooner by Karlstads Mek. Verk. in Sweden. Working the Icelandic trade it was converted to an auxiliary motor vessel, then a bulk carrier before it was "rescued" by Canadian Sailing Expeditions and converted to a harbour tour boat, closely resembling its original  design.  Passing through Tall Ship Silva Inc to Murphy Sailing Tours Ltd, the boat is a popular waterfront attraction (in summer). Its fleet mates are also in winter layup in various parts of the harbour, although former fleet mate Haligonian III, retired in 2016, remains tied up in Sambro.