Halifax Regional Municipality Council has (finally) ordered the removal of a statue of Edward Cornwallis from a prominent city park. The statue (erected t in 1931) to honour the founder of Halifax and Governor of Nova Scotia (1749-1752) has become a lighting rod for protests over the treatment of indigenous peoples.
There is much to be reviled about Cornwallis. His treatment of Scottish highlanders in putting down the Jacobite Revolution would certainly be grounds for a charge of war crimes today. No less heinous was his proclamation of a bounty to "take prisoner or scalp" for Mi'gmaq fighters and take women and children as prisoners. Cornwallis' less than stellar military career, term as a British MP and Governor of Gibraltar (1761-1776) - (surely a subtle form of exile) came to an end with his death in 1776.
How society is to remember Edward Cornwallis is open to debate, since we should never forget the damage he inflicted. However removing his name and statue from places of prominence is an important first step in expressing our regret for his actions.

This brings us to the subject of CCGS Edward Cornwallis a High-Endurance Multi-Tasked member of the Canadian Coast Guard fleet since 1986, and its predecessor of the same name from 1949. Surely it is time for the name to be painted out from that ship and a new one selected.

The following is the text of an open letter I sent today to the Minister of Fisheries and Oceans and the Canadian Coast Guard, the Hon. Dominic LeBlanc, PC, MP.


Named for the founder of Halifax, and a Governor of Nova Scotia, and bearing the same name of a previous Coast Guard ship, the vessel has provided good service to the Coast Guard and the people of Canada since 1986.


However we are now aware that Edward Cornwallis, the man, was not a figure to be revered. His actions as governor did much to entrench a racism that is still pervasive in our society. His name stands in the way of meaningful dialog between friends and neighbours.

The City of Halifax has seen fit to order the removal of a statue commemorating Edward Cornwallis, and may be moving toward removal of his name from streets and other public venues.


It is my opinion that the the Canadian Coast Guard must now remove the name EDWARD CORNWALLIS from that ship. I am therefore requesting that you use your authority as minister to set that process in motion.


The Canadian Coast Guard has naming policies for vessels of all sorts, (Fleet Order 103.00). In that order it states that the Minister is responsible for approving name selections for vessels. May I suggest sir, that the importance of selecting an appropriate name to replace the current one, is an opportunity to make an important statement.


Appendix A of that policy now states that vessels of this class (High Endurance Multi-Tasked Vessel) are to be named after former Canadian Governors General. I can think of several holders of that office whose names might be appropriate, including your late father. However I wonder in this case if it might be possible to deviate from that policy and select the name of an eminent historical leader of the Mi'gmaq, whose position would be the equivalent to a governor general."
I have also copied the Member of Parliament for Halifax, Andy Filmore, in hopes that the matter will be addressed during the current session.

The Coast Guard missed a perfect opportunity to rename the ship while it was in refit in St.John's last summer, but it is never too late to right a wrong. 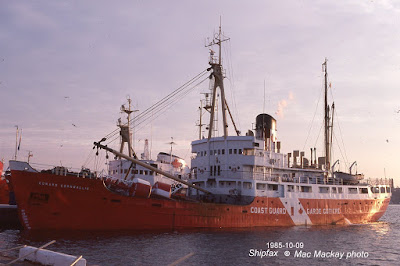 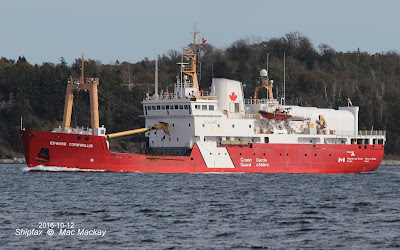