The so called weather bomb certainly brought high winds and the storm surge created havoc on coastal roads, with many washed out or washed over. Small ports saw wharf damage and more than half of all Nova Scotians were without electrical power for a least some of the time.

Halifax harbour however seems to have escaped relatively unscathed. By today some shipping had returned more or less to normal, even  though there were still gale warnings and freezing spray warnings in effect.

The multi-purpose general cargo ship Symphony Star arrived this morning after riding out the storm in St.Margaret's Bay since Wednesday night. One of six ships of the ECO Box design, it was built by Ferus Smit's Leer, Germany shipyard in 2015, and has a single box shaped hold suitable for bulk, general or heavy cargoes, and carries a pair of 85 tonne cranes that can work in tandem. It has a modest grt of 6749, and deadweight of 10,546.It can operate "open top" for oil field supply and similar work, and then has a deadweight of 7,120 tonnes. 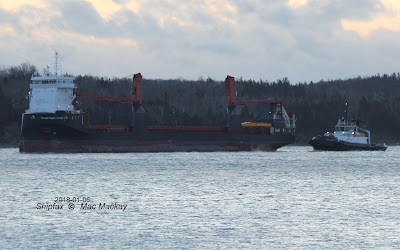 The unusual house forward and reverse bow, make the ECO Box ships  stand out from the crowd. The ship was chartered out as Nordana Star from 2015 to 2016 when it returned to Symphony Shipping, a Dutch company. (Sister ship Nordana Sky was charted by Desgagnés in 2015 to carry salt out of Pugwash, NS.) 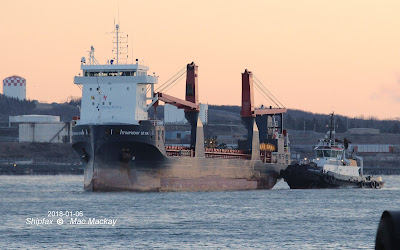 Once alongside at pier 28 the ship began refueling from tank trucks.

After weathering the storrm in the relative comfort of Bedford Basin the Canadian bulk carrier Radcliffe R. Latimer moved to pier 26 this morning and entered winter layup.

It is customary for Great Lakes ships to tie up for one to three months each winter for needed maintenance, and there have often been ships from Canada Steamship Lines laying up in Halifax. However it is rare that Algoma Central Marine ships lay up here. 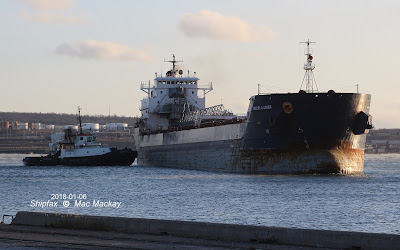 The ship is no stranger to Halifax, sometimes bringing in grain and /or loading out gypsum. Built originally in 1978 by Collingwood Shipyard as Algobay, it was a "Nova Scotia" class ship, meaning that it could make limited sea voyages and was the maximum size allowed by the St.Lawrence Seaway locks.In 1987-88 it was upograded to "Caribbean class" allowing for deep sea work. After a time under foreign flag and a charter to CSL as Atlantic Trader from 1994 to 1997 it reverted to Algobay until it was laid up in 2002, in need of major repairs from years of wear and tear..

In 2007 it was announced that a new forebody would be built in China and connected to the existing superstructure. A towing operation that began in Hamilton, ON in May 2008, using a series of tugs, saw the ship arrive in China in December (via the Suez Canal) where the new forebody was connected, and the old hull sent for scrap.

After a re-engining and rebuilding its self-unloading machinery machinery, the ship returned to Canada (via the Panama Canal) under its own power and resumed trading in 2010. It was renamed Radcliffe R. Latimer in 2012 in recognition of the retired Chairman of the Board of Algoma Central. 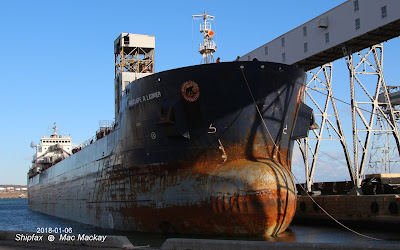 After de-ballasting all morning, the crew then put out extra heavy weather lines and the ship was laid up. Some crew, mainly engine rooms crew, remain with the ship during the winter for maintenance work, and contractors come in to work on other repairs such as the inside of ballast tanks, and cargo holds.