With breakbulk exports way down last year, the Port of Halifax must be pleased to see another Spleithoff ship arriving. In recent months they have been regular callers, loading what appears to be reinforcing steel. Re-bar as it is called is an unusual Canadian export, but the high production standards used in this country make it a more desirable then unreliable re-rolled third world material often derived from ship scrapping. 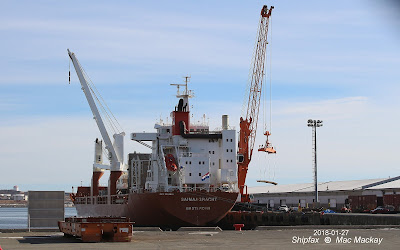 Logistec's mobile crane swings another bundle of re-bar aboard.

One of Spleithoff's S2L class, it was built in 2005 Szczecinska Nova in Poland. It is equipped with two 120 tonne cranes and five sidleloaders. It measures 18,321 grt and 23,660 dwt. Later in the day the ship shifted to Fairview Cove for container cargo. 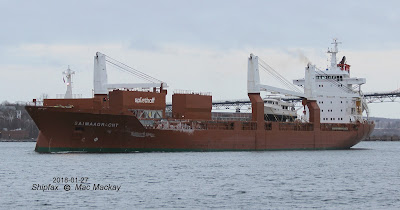 And yes that is a pleasure craft on the deck of the ship. Spliethoff has a large business in the dry transport of yachts. 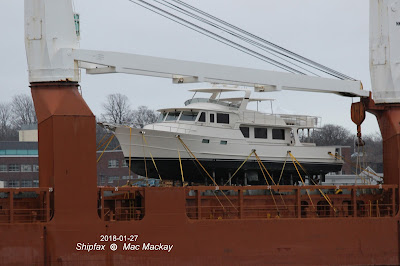 The luxurious trawler yacht Penny Lane gets a dry trip. The 65 foot Fleming, built in 2009 carries a rigid hull inflatible craft called - what else but Rubber Soul.

A ship that has not called in Halifax since late 2013 put in another appearance today to take bunkers. CSL Acadian is a coal carrier and it is headed back from a delivery to Belledune, NB. A self-unloader now, it was built as a tanker in 1982 by Tsuneishi ZKK in Numakuma, Japan. Named Janus for the Anders Jahre fleet, it measured 40,482 grt, 67,208 dwt. It was renamed Skaulake in 1991 then Cabo de Hornos in 1992. 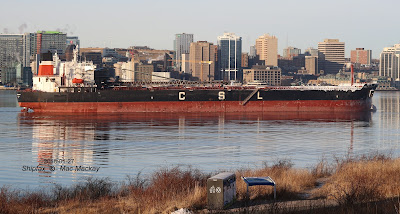 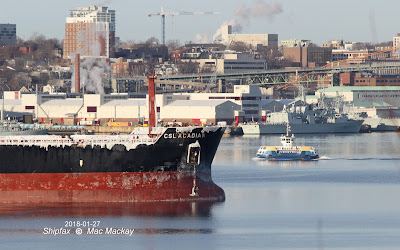 CSL Acadian picked up some frozen spray during  its passage from the Gulf of St.Lawrence and Baie de Chaleur.

When single hull tankers were banned in most countries following the US lead after the Exxon Valdez grounding, the ship was still in good condition, with a quality B+W main engine (built under license). CSL International acquired the ship and renamed in Cabot in 2004. It was then rebuilt with a new forebody as a self-unloader and renamed in 2006. Now measuring 45,740 grt, 74,517 dwt, it has many years service left.


Travellers between south western Nova Scotia and New Brunswick will have to go the long way until March 20. The ferry Fundy Rose made its last crossing between Digby, NS and Saint John, NB January 24 and headed for Halifax. 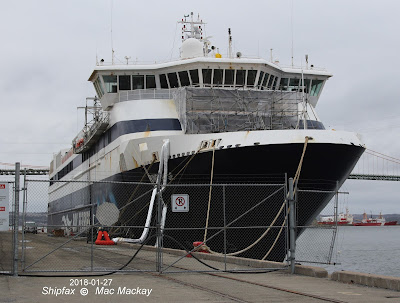 It is now berthed at pier 9 for a refit. When the Minister of Transport acquired the Blue Star Ithaki in 2014 it was renamed Canada 2014 and came to Halifax where it received an extensive refit before entering service July 18 2015.  It was named to commemorate Rose Fortune a notable Digby citizen, born a slave and credited with being the first female police officer in Canada.

The ship has been well received on the Fundy service, and has been working steadily until now. It certainly shows cosmetic evidence of that hard work.


The exodus of RCN ships for warmer climes happens every winter, but this year there is a bit of a twist as Kingston and Summerside headed for West Africa this week. Newspaper accounts report that the ships of this class were built as minesweepers and intended to be coastal vessels but now seem to be able to "go anywhere". Several have indeed made trans ocean voyages. These two will head to the Caribbean first before taking the shorter equatorial crossing of the Atlantic to join Operation Obangame Express 2018 in the Gulf of Guinea.

Orange clad matelots tidy up on deck and stow fenders as Windsor heads for sea.

Also sailing today was HMCS Windsor Since it did not declare its destination I can only assume it is headed south also.

At Autport Glovis Companion was unloading another batch of cars. The ship was built in 2010 by Mitsubishi, Nagasaki as Ocean Challenger. The 60,213 grt, 18,671 dwt ship has a capacity of 6,340 cars and was acquired by NOCC (Norwegian Car Carriers AS) in 2013 and renamed. 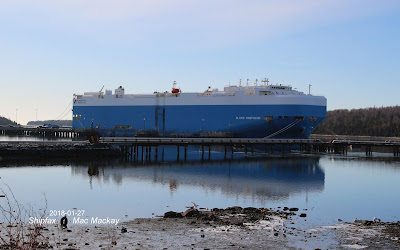 The tide was way out in Eastern Passage, and a conveniently discarded tire will serve as the copyright mark for this photo.

Late in the afternoon the ship moved to pier 27 to work more cargo, and free up the berth for the next ship, Mediterranean Highway. There is a steady stream of ships into Autoport this winter as usual, stocking up the lots for the spring.

Always impressive, Atlantic Container Line's Atlantic Star arrived  on its regular slot this afternoon. The first of the G-4 ships to call in Halifax, it made it first visit January 6, 2016. 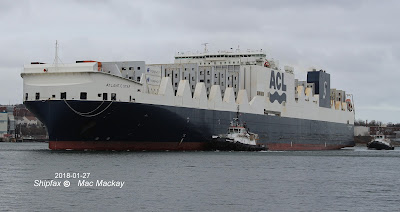 All five of the new G5s have had breaking-in issues, but now that the bugs have been largely ironed out ACL has announced that it will accept up to 12 fare paying passengers on transatlantic voyages. A variety of fares, depending on ports and choice of accommodation sound quite reasonable for such a unique experience.

Finale
The autocarrier Mediterranean Highway almost missed the last call for photos as dusk descended rapidly this afternoon. It is passing the Maugher's Beach lighthouse in bound. 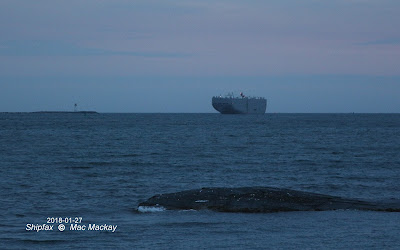