In the aftermath of the tragic tanker fire last week off China in which all thirty-two crew members of the Iranian tanker Sanchi lost their lives, it is well to realize that no matter how up to date and state of the art we are, shipping accidents will happen. Halifax is no stranger to such tragedies, but since 1917 we have been mercifully spared another similar terrible event.

There have been numerous groundings, sinkings and other total losses in Nova Scotia waters, so we are not immune, but few have had any close connections to Halifax. I can think of the Gold Bond Conveyor mentioned previously in these pages and a search shows several references: http://shipfax.blogspot.ca/search?q=gold+bond+conveyor

One that perhaps may not come immediately to mind occurred January 5, 1993 when the Liberian flag Braer ran aground and became a total loss in the Shetland Islands. It was loaded with 85,000 tonnes of crude oil, all of which spilled into the sea. It was a very light oil, called Gulfaks, which dispersed and did not create the widespread mess that the Exxon Valdez or the Arrow did, but nevertheless was responsible for the direct loss of thousands of seabirds and seals and unknown other longer term environmental effects. 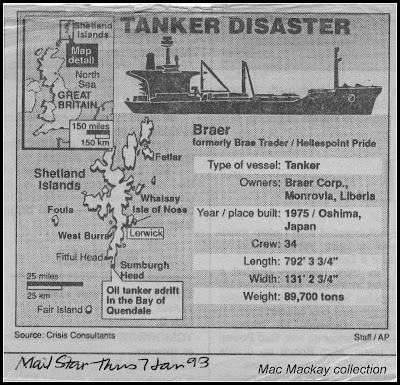 Braer was at the time en route from Mongstad, Norway to St-Romauld, QC with its cargo for Ultramar, when a pipe rupture on deck allowed water to contaminate its fuel supply and it lost power. It drifted onto rocks which punctured its single hull. Recent recountings of the incident are at odds with the notes I made at the time, but it is clear that  towing the ship away from the rocks might have been successful but for an unfortunate lack of organization. Once aground it was struck by the most intense extratropical cyclonic storm on record, and was beaten to pieces. Fortunately the crew had been removed and there was no loss of (human) life.

All this is a reminder that I am still waiting for the federal government to deliver on its promise for Emergency Towing Vessels (ETVs) on the Canadian Coasts. The government tender is supposed to close January 16, but it may be some time before we hear the results. All this when recent intense storms remind us that the worst weather of the year on this coast is late fall and winter, so there will likely be no standby vessel this winter.

Clever offshore operators have recognized that there are some great deals to be had acquiring modern tonnage due to the world wide slump. (See today's Tugfax). Davie shipyard in Quebec has even offered to acquire some icebreaking tugs at a bargain, but Canada seems determined to take its time to take responsibility for Guarding our Coasts. 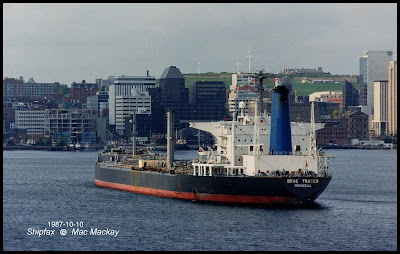 The other  reason that I mention the Braer at all is that it did visit Halifax, and I was on board tugs that docked the ship in October 1987. It was named Brae Trader at the time, although it had been built as Hellespont Pride for the Canadian company Papachristidis. Oshima Shipbuilding of Nagasaki built the ship in  1975 and it measured (by today's standards) a modest 44,989 grt, 89,730 dwt. Papachristidis sold the ship in  1985 when it became Brae Trader. In 1989 it was sold again when it was renamed Braer. 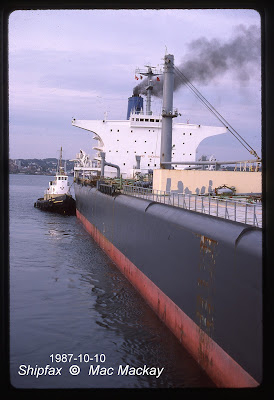 Aboard the tug Point Halifax I took this photo of the Point Vibert making fast aft.

Brae Trader poses against a vastly different Dartmouth skyline (as is the Halifax skyline in the upper photo.).

We do not need more oil spills, fires, groundings or loss of life (in its many forms) and despite all reasonable precautions, they are likely to happen due to force of weather or human error. However the effects can be reduced by providing timely and organized responses to emergencies. This includes vessels standing by and able to tow ships, with an overall organization set in place to mobilize resources.