At Nova Scotia Power's Tuft's Cove generating plant on the Narrows, the Greek tanker Fourni was preparing to sail this morning. The 29,663 grt, 51,611 dwt ship, dating from 2010 and built by Hyundai Mipo, Ulsan had completed unloading one of the rare tanker cargoes at the plant. The facility was built to burn oil and can still do so but normally burns natural gas. Once in a long while it does take a cargo of oil, and often that is from an Eletson Corp tanker, and it is rarely a full load. 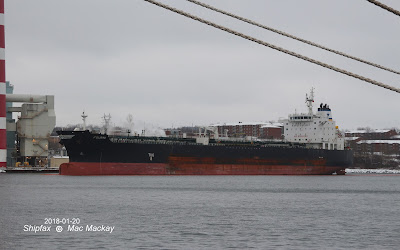 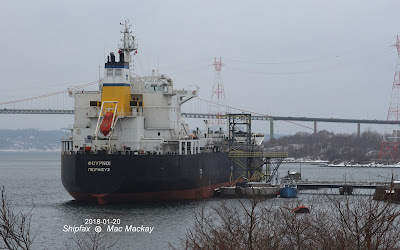 Boats from Connors Diving removed the floating oil boom and released the ship's lines from the buoys fore and aft (the mooring buoy is orange in the lower right of the photo above). 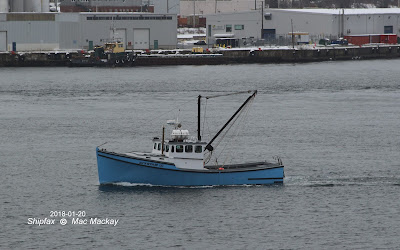 Divecom III, built in 1984 is one of Connors' diving tenders and general work boat It handles the lines. (That is McNally's tug Mister Joe in the background with a dump scow en route from Port Hawksbury to Saint John.) 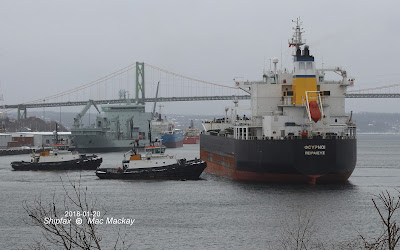 Atlantic Willow (foreground) and Atlantic Larch swing the ship off the berth. in the narrowest part of the Narrows. The naval replenishment ship Asterix, cargo ship Thorco Logos and supplier Atlantic Condor occupy Piers 9B and C. 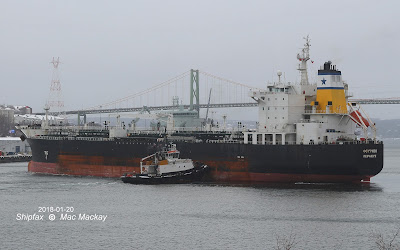 Atlantic Willow shortens up and pushes while Atlantic Larch (out of the picture) pulls to turn the ship.

Turn completed, Fourni heads to sea. It will anchor off Halifax awaiting orders for its next cargo. 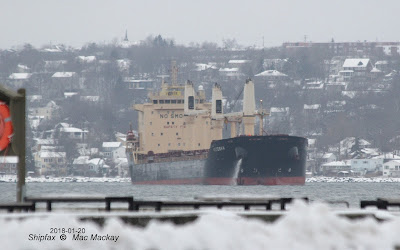 Anchor clear,, the ship begins to get undewrway.

Built in 2010 by Shanhaiguan Shipyard in Qinhuangdo it is one of a pair* of ships originally ordered by Fednav. The name Federal Pearl.(after the Pearl River) was selected but by the time the ship was launched it was named Eastwind Yates. However it entered service as Vitosha, The Bulgarian state shipping company has had a longstanding arrangement with Fednav, so this was probably some form of financing agreement. The bulker, with three 30 tonne cranes, measures 19,865 grt, 29,800 dwt and is suited to trading to the Great Lakes. However with the St.Lawrence Seaway closed for the season, the ship's cargo of alumina/bauxite, loaded in Imbituba, Brazil, is bound for the RioTinto-Alcan smelters in La Baie, QC, on the Saguenay River. 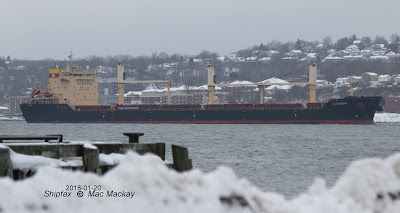 NavMar Bulgare ships are easily recognized by their sandy coloured superstructures and cranes. They also have black hulls, but this ship sailed with a red hull for its first few years, a legacy of its Fednav roots.

* [The sister ship was ordered as Federal Yangtze, launched as Eastwind York and delivered as Strandja.] 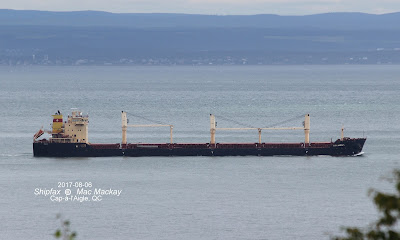 Strandja on the St.Lawrence August 6, 2017 bound for Oshawa to unload, then Thunder Bay to load, finally exiting the Seaway September 3.]

Loaded to near cpacity, APL Danube prepares to turn off pier 42 with the assistance of the tugs Atlantic Fir and Atlantic Oak.

The ship's capacity is 9365 TEU (including 1458 reefers), but its split superstructure makes it appear much larger. Built by Dalian Shipbuilding Industry Co in China in 2014 as CMA CGM Danube it was renamed  NileDutch Orca in  2016 then earlier in 2017, APL Danube as it was moved between various CMA CGM subsidiaries. APL (American President Lines, is owned by Neptune Orient Lines of Singapore, acquired by CMA CGM in 2016).
The ship probably could be lengthened to increase capacity if needed.