This afternoon's arrival of  ZIM Djibouti, a 10,000 plus TEU ship at Halterm has become the new normal, and passes without comment. It was only in June 2017 when the first ship to exceed the 10,000 TEU mark, sister ship ZIM Amsterdam  arrived in Halifax.

Tugs Atlantic Fir on the bow and Atlantic Oak on the stern are ready to turn the ship as it approaches Halterm.

Halterm was working two ships today, the weekly Maersk/CMA CGM ship Maersk Penanag was already in port. Normally Saturday callers, these ships have been arriving on Sunday recently, likely due to ice in the Gulf slowing their trip to and from Montreal.

Meanwhile at Fairvew Cove the HAPAG-Lloyd Palena was just sailing as the Yang Ming YM Enlightenment entered the Narrows. The latter is a 47,952 grt, 56,500 dwt ship with a capacity of 4662 TEU. Built by China Shipbuilding Corp in Kaohsiung, Taiwan, in 2015, it is one of four sister ships maintaining the AL1 service from the Mediterranean to the east coast of North America for THE Alliance. 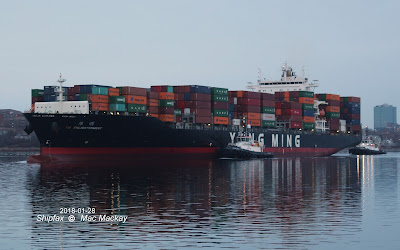 YM Enlightenment has just passed what has become known as Ground Zero, the site in the Narrows of the Halifax Explosion December 6, 1917. 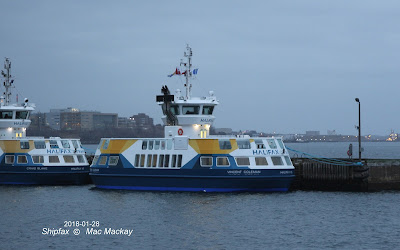 A newcomer to Halifax is the ferry Vincent Coleman which arrived fresh from the builders on Friday.  The second last of the new ferries built for the Halifax Regional Municipality, it is named for the telegrapher that sent out warnings to incoming trains warning of the Halifax explosion in 1917. Working at Richmond Station, he lost his life when the explosion occurred nearby. In a contest to suggest names for all the new ferries Vince Coleman was on the short list twice, and was finally selected for this vessel. Built by A.F.Thériault + Son Ltd in Meteghan River, NS, it measures 259.45 grt, and  is a sister to the previously delivered Craig Blake,  Viola Desmond and Christopher Stannix. The final boat in the order, to be named Rita Joe, is due in a few months time.