Red sky in the morning 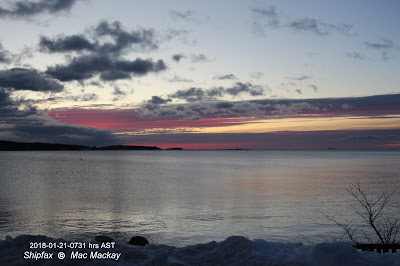 Sailors are supposed to take warning from a red sky in the morning, but certainly nothing ominous occurred in Halifax today. Ships were able to arrive and depart in relatively calm conditions and bright sunshine.
There was still a swell running outside the harbour, with stiff winds (see Tugfax).

The container ship NYK Artemis arrived with tug escort as it made its way to Fairview Cove. It is a 75,484 grt, 81,171 dwt ship with a capacity of 6492 TEU (including 450 reefers). On the EC5 service of THE Alliance, it works with ten other ships from partners HAPAG-Lloyd, K-Line, and Yang Ming. 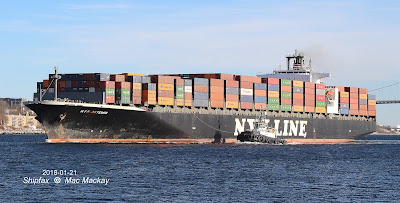 As expected for a Japanese ship owner, the ship was built by IHI, Kure in 2003. Following the lead of shipping industry takeovers and consolidations, NYK, K-line and MOL have received final approval from the last of the trading nations, to merge their container carrying into Ocean Network Express (to be known as ONE), effective in April. Early publicity showed a ship painted in an eye searing "cherry blossom magenta" hull colour, with containerS of a similar hue on deck. the amalgamation should have been rejected on aesthetic grounds alone! If the entire fleet, that will have a capacity of 1.44mn TEU, gets the new hull colour, it will be a windfall for magenta suppliers. ONE will be a memeber of THE Alliance, so I guess we should be prepared. 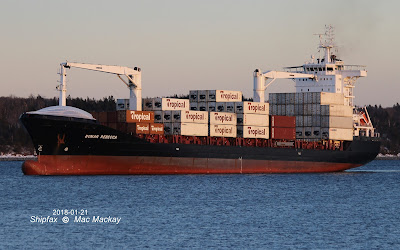 At the south end of the harbour Bomar Rebecca arrived for Tropical Shipping. The 1118 TEU ship, built in 2008 by Jingling Shipyard in Nanjing first called in Halifax a year ago on January 16, 2017, but carried the name AHS Hamburg. It changed names here July 3 when it was sold by Carston Rehder Shiffs to Bernard Schulte. When built it was as Pacific Hawk, a name it carried for Bocksteigel Reederei until sold in 2012.

There was more naval activity today as HMCS Montréal arrived from sea.

Although distinctive, the Halifax class frigates could not be callled terribly attractive.

It was probably involved in the same exercises recently completed by the new naval suppl,y vessel Asterix. During the past week HMCS St.John's sailed for the middle east and HMCS Charlottetown returned from its six month deployment to the Baltic and Mediterranean.

Also last week the government announced that Marine Recycling Inc had been awarded a $5.7mn contract to break up the decommissioned former HMCS Athabaskan at Sydney, NS. The work also includes de-militarizing and removal of hazardous materials. According to the terms of the original tender, the ship was to be towed out of HMC Dockyard no later than March 31, 2018 (the end of the government's financial year). 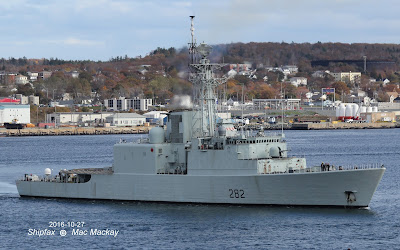 The last of Canada's destroyers - soon to be no more.
The continuous deck line and balance of shapes made the Tribals among the best looking warships on the seas.

It will be interesting to see if the ship will actually go to Sydney on that date, since that port is likely still to be subject to severe ice conditions. The ship's last brush with ice in December 2012 resulted in six hull punctures and an estimated $2mn of repairs.This followed a $21.7mn refit in St.Catharines, ON, and over $1.2 mn of towing charges.
It is more likely that a place will be found in Halifax to park the ship for a few months while some of the initial work is carried out.