The huge storm that swept up the US east coast arrived in Nova Scotia this morning and in Halifax by late morning. Extreme high winds and driving rain last until early evening when it became eerily calm and the rain virtually stopped. Widespread power outages included Ship Central (home of Shipfax). A storm surge is expected at high tide 2300 hrs this evening.
Shipping activity ground to a halt as ships either held off the port or went to anchor or to safer berths. A brief roundup:


. NACC Quebec had been en route to Baltimore Providence from Port-Daniel, QC with cement, but after anchoring off Lockeport/Shelburne opted to come to Halifax for better holding, and anchored in Bedford Basin. 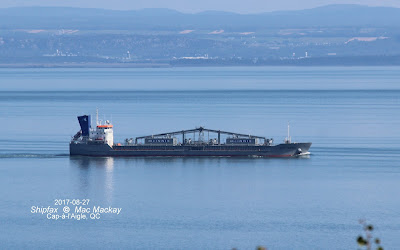 NACC Quebec in more serene conditions. Operated by Nova Algoma Cement Carriers, operating out of the McInnis Cement plant in Port-Daniel, QC to US and Canadian ports. The unusual funnel houses a Pure SOx exhaust scrubber. Built as Tenace in 2011 by Tuzla Gemi Endustrizi in Turkey as a bulk carrier, the ship was converted in 2016-17 to carry cement.Tonnages: 9,286 grt, 13,800 dwt.

. Radcliffe L. Latimer arrived late Thursday and went directly to anchor instead of pier 25-26.
. Oceanex Sanderling anchored in Bedford Basin.
. CCGS Cape Roger arrived at BIO, CCGS Sir William Alexander remains alongside.
. Asterix was to move to an anchorage Wednesday, but found space at pier 9c. (Her huge superstructure would be subject to windage such that anchoring might not be feasible). During the day the tug Atlantic Spruce was tethered alongside, but was not needed by evening, and tied up nearby
. Offshore suppliers Burin Sea, Trinity Sea, Siem Hanne and Atlantic Condor are all tied on at pier 9c.
. Algoma Dartmouth moved to pier 9.
. IT Intrepid remains at pier 9A,
. Tug Atlantic Fir moved to pier 6 at Halifax Shipyard alongside the barge Atlantic Sealion
. The pilot boats Nova Pilot and Scotia Pilot moved to the inner face of Jetty November Lima in Dartmouth.[see below]
. Metro Transit cancelled all ferry and bus service.
. The Bridge Commission closed the A. Murray MacKay bridge for a time, then partially opened but kept it closed to high sided vehicles.
. Tugs Atlantic Oak and Atlantic Willow are tied on the inside of the IEL dock.
. Irving Oil tanker Acadian sailed at 0800 hrs - the last ship to arrive or sail for the time being.
. Nolhanava remains nestled inside pier 36.

Outside:
The cargo ship Thorco Logos (a light ship, with only cable racks in its hold) opted to leave its anchorage position in Bedford Basin and head out to sea  late last night.

In St. Margaret's Bay, just to the south of Halifax the heavy lift ship Symphony Star anchored off Mill Cove. It arrived at the pilot station last night and went directly to the Bay. It has cargo for pier 27-28.
Also nearby is Bomar Rebecca. The Tropical Shipping container ship sailed from Halifax last night.

In the Bay of Fundy, the container ship Zim Constanza bound from Halifax for New York is hove to or slow steaming. It left Halifax late last night. (Numerous other ships are also in the mouth of the Bay, bound for Saint John).

. Two arrivals scheduled for today, Budapest Bridge and Atlantic Sky, have been held off, with no definite arrival time scheduled yet. Arrival times will depend on conditions being suitable for the safe boarding of pilots. This will be a test for Halifax's "new" pilot boats that are much lighter and have lower freeboard than the previous boats. There is some suggestion already that they may not be as capable as their predecessors.

Winds are predicted to build up again overnight tonight and remain high until mid-day tomorrow. Temperatures will also drop from the relatively balmy +5c of today to -9C.