After a rough North Atlantic Crossing and a delayed arrival due to various weather bombs and storms, Tirranna tied up at Pier 27-28 today. It was originally scheduled to arrive earlier in the week, but spent at least two days jogging offshore until conditions permitted it to enter port. 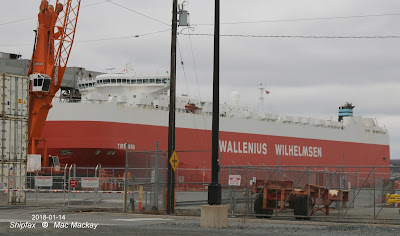 Jammed in to pier 27-28, the ship monopolizes the area, and is almost as high as the grain galleries.

At pier 27-28 it begin unloading  machinery and other cargo that will be forwarded by truck or flat car. This afternoon it moved to Autoport to complete discharging autos.

This is the fourth ship in the Wilhelmsen fleet to carry the name of the Albanian capital, (Wilhelmsen ship names begin with the letter "T").

The first Tirranna was the best known, a 7,230 grt general cargo ship with refrigerated cargo space and accommodation for twelve passengers, built by F. Schichau in Danzig in 1938. In 1940 it was captured by the German raider Atlantis off Mauritius. It was then sent back to Germany with captured ships' crews as prisoners. On September 29, 1940, while trying to run the Bordeaux blockade, it was torpedoed by HM submarine Tuna and sank in the Gironde estuary with the loss of 87 of the 292 people aboard.

The ship is expected to sail tomorrow.