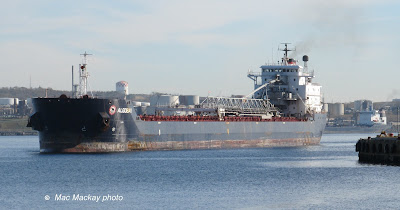 The bulker Algobay arrived this morning with a load of grain. from Thunder Bay. This is the ship that was rebuilt in China two years ago, using most of the 1978 afterbody. That rebuild included new engines, and new self-unloading gear.
The ship's first call in Halifax since the rebuilding was in September 2010 when it loaded gypsum. It will return to Halifax again this month with a load of corn which it will load in Hamilton, ON in about two weeks time.
For more on the ship see:
http://shipfax.blogspot.com/2010/09/algobay-returns.html