1. Novadock is positioned in one of the narrowest parts of the harbour. 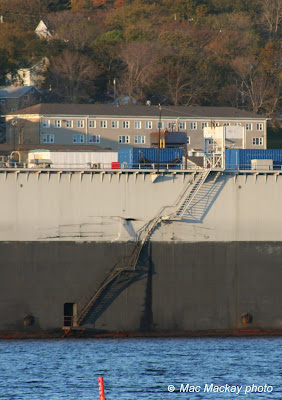 2. Ouch#1 including gash, with a navy buoy in the foreground, signaling shallow water. 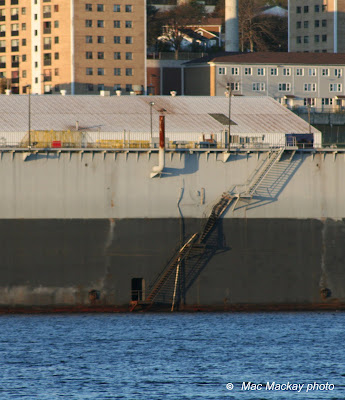 
Yesterday's incident with HMCS Preserver seems not to have produced too much panic at Halifax Shipyard. I didn't detect any activity on the outside wall of the Novadock this morning, where the damage was quite evident. It included two mangled companionways and a gash in the side wall of the dock. It is possible that these will not effect the operation of the dock. Work was apparently continuing within the dock setting up blocks for CCGS Louis S. St-Laurent.
Meanwhile Preserver was alongside at HMC Dockyard with a nasty looking set-in to her sprayrail forward. I expect that some of this damage extends to frames below the weather deck, and that repairs will be time consuming and expensive!
The ship was under full naval control at the time of the incident, but was still undergoing post refit engineering trials. Speculation on the cause is no doubt the topic of conversation in may pubs, but I have no particular insights.
I do make the following observations:
1. Turning a ship that size in the Narrows seems needless. Lots of other ships go the Basin to turn. Some ships turn north of the Novadock, but they use a lot more powerful tugs when doing so.
2. Turning was necessary because the Force Defence Booms prevent turning in the lower harbour. These expensive (and not fully utilized) booms were set in the water to protect naval vessels from attack. They also whacked a huge chunk off available space in the approaches to the Narrows, where some ships (maybe even Preserver) could have been turned by tugs.
.
Posted by Mac at 8:10 PM