Deck crew gets a shower 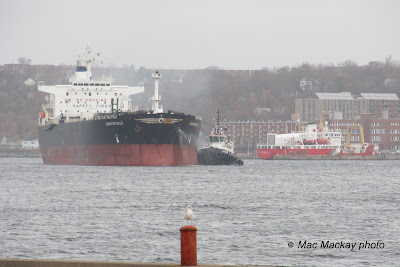 The Greek tanker Serifopoulo arrived this morning and anchored in the harbour. When a berth became free about noon time the ship got set to move in to Imperial Oil. While heaving anchor the ship's crew ran a deck hydrant to wash the chain and provide a little free lubrication (and spark prevention) as it was brought aboard.

With the stiff breeze most of the water was blown down onto the deck crew of the tug making up alongside. One of the many joys of a tugboat man!
Serifopoulo was built in 1995 and measures 28,507 gross tons and 46,700 deadweight tonnes. It is operated by the family owned Eletson Corp noted for their well kept fleet of 23 tankers and four gas carriers, all sailing under the Greek flag, and named for Greek islands.
.
Posted by Mac at 9:23 PM