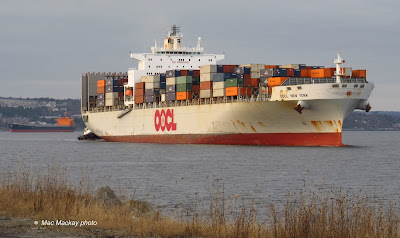 1. The tug Atlantic Oak swings the stern of OOCL New York to line up for the Narrows. Anchored quietly in the Bedford Basin is the Torm Pacific, which arrived a week ago.

Things are pretty quiet in the Big Harbour these days. Aside from the regularly scheduled ships, there isn't a lot of interesting activity. Even the big container liners are coming and going in a few hours, and look lightly loaded.
OOCL New York is a perfect example. It arrived early this this morning and when it left at 1530 there was a lot of boot topping showing, so it wasn't very heavily loaded. Not a good sign.
The post-Panamax ship of 66,289 gross tons, built as E.R. Hong Kong, is owned by the Ernst Russ company of Hamburg and flies the German flag. Built in 1999 it has a capacity of 5762 TEU. From the look of it, most of those TEUs were empty today or carrying goose down.
It has been calling in Halifax for OOCL since January 28, 2006.
.
Posted by Mac at 11:19 PM