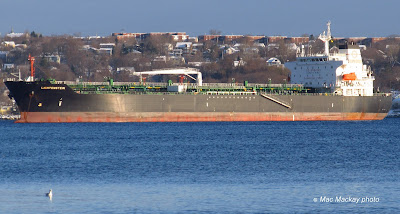 The landlocked tax haven and collectible postage stamp state of Lichtenstein seems an odd name for a Greek owned tanker, built and managed in South Korea, but such is the strange world of ship ownership.
Lichtenstein the ship was built in 2009 by the Tongyuong Shipyard in South Korea, and is managed by DL Shipping of Busan. It is owned by Lichtenstein Shipping Co, which gives its address as the same as DL. However it is reported that the owner is Top Ships of Athens, Greece. That it is registered in Panama does give some clue that not too many taxes are paid to Greece!
Of 30,006 gross tons and 44,999 deadweight tonnes at summer draft, it is on the large side for a chemical/oil products tanker. Judging by the number of manifolds however, it would certainly be able to carry a wide variety of cargoes at the same time.
It arrived yesterday, and is to move this evening to Imperial Oil dock #5. That dock is usually used for crude oil.
.
Posted by Mac at 5:09 PM