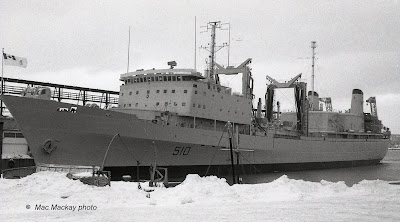 1. HMCS Preserver January 3, 1971. The bow mounted gun was removed due to its exposed location.


HMCS Preserver "bumped" her pier when she arrived from sea early this afternoon. I have no details, but the CBC reports that there is visible damage. Divers were called to the site almost immediately after the event.

Preserver is just out of refit and has only been fully operational for a few weeks. OUCH!

Update: the incident occurred as the ship was turning in the harbour, and what it struck was the Halifax Shipyard's Novadock, smashing a companion way and punching a hole in the side of the floating drydock. This is most unfortuinate as the shipyard was preparing the dock for Monday's arrival of CCGS Louis S.St-Laurent for emergency repairs to its centreline prop/shaft.
The Novadock is registered as a vessel, but is permanently moored, and therefore is a fixed object. I will stick with the term allision.
.
Posted by Mac at 5:36 PM