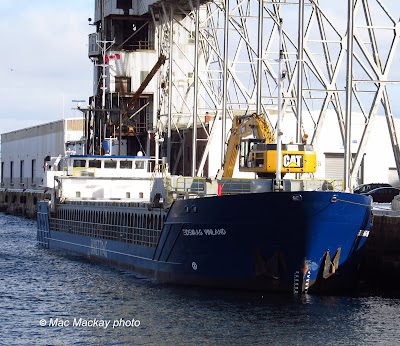 Lots of ships are registered in ports that they may never visit, particularly flag of convenience ships. Canadian ships usually do see their ports of registry from time to time, but in the case of Eidsvaag Vinland there would normally be no reason for it to call in Halifax.
The ship is a bulk fish feed carrier, and shuttles from St.Andrews, NB to fish farms in Newfoundland.
Its visit to Halifax is likely due to weather. An intense storm passed over the area yesterday, just after the ship's arrival at pier 23.
Built in 1994 in Holland as Visserbank the ship was registered in Halifax June 28 of this year, but took its new name in May while in refit in Tallin, Estonia. It is operated for Skrettling Canada Inc, of Vancouver, BC, a company with Norwegian roots in the fish farm industry.
Since its Netherlands days, when it plied the coastal and inland waterways of Europe, it has been fitted with a travelling crane. The crane is used to load and dispense its cargo directly into fish pens. Its original equipment consisted only of a travelling gantry to lift hatches, and had no cargo handling gear. Its mast can be folded flat to decrease air draft, but its high hatch coamings give it good cubic capacity. Of a relatively modest 1,682 gross tons, its deadweight tonnage is a respectable 2,503 tonnes, all in one large hold.
If the ship continues to go about its regular business, we are unlikely to see it in Halifax very often.
For the record Eidsvaag AS is a Norwegian shipping company specializing in fish feed ships. (It has a fleet of a dozen or so.) It is the ship's owner, and has a contract with Skrettling to provide ships in various parts of the world. Here is the translated web site for Eidsvaag: http://translate.google.ca/translate?hl=en&sl=no&u=http://www.eidsvaag-rederi.no/&ei=DKLOTvrrKcnY0QHZ8skm&sa=X&oi=translate&ct=result&resnum=1&ved=0CCAQ7gEwAA&prev=/search%3Fq%3Deidsvaag%26hl%3Den%26biw%3D1372%26bih%3D810%26prmd%3Dimvns