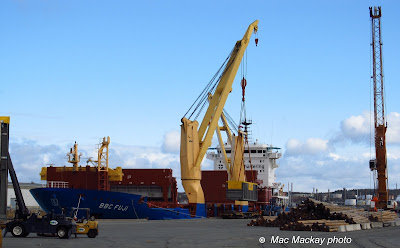 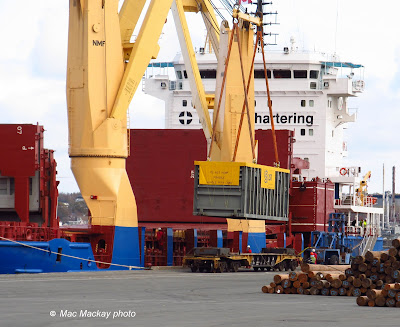 2. One of the ship's cranes makes easy work of a generator module weighing 100 tonnes or so.

The general cargo ship BBC Fuji spent the day loading steam generator modules from Innovative Steam Technologies (ISI) of Cambridge, ON. The four modules arrived by rail and some component parts by truck over the last few weeks.
The ship is very new, and was delivered in June by Xingang Shipyard in China to Briese Schiff's GmbH of Germany. This company, known also as BBC Chartering, has a modern fleet of more than one hundred ships, many of them equipped with heavy lifting gear. BBC Fuji's cranes can each lift an astounding 350 tonnes. The ship measures 8255 gross tons, 9266 deadweight, and is a versatile vessel, capable of carrying a variety of cargoes including paper, timber, bulk grain, 660 TEU of containers or heavy lift and oversize.
ISI has exported their "Once Through " steam generators all over the world.
.
Posted by Mac at 9:01 PM