1. Algosea moves down the harbour toward Imperial Oil. 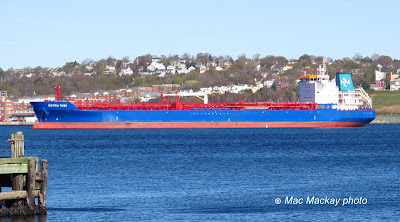 2. The handsome Histria Tiger awaits a berth at Imperial Oil. 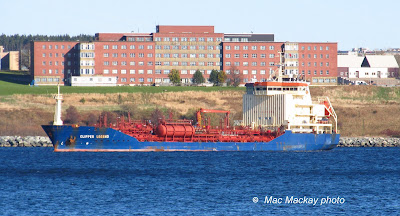 3. Clipper Legend also waits at anchor for its turn.

The Imperial Oil refinery continues to be busy with a variety of chemical and product tankers shuttling in and out of berths to unload and load.
Today's activity included Algosea moving from anchor in Bedford Basin to the oil dock this afternoon. On the way is passed two tankers at anchor awaiting berths: Histria Tiger and Clipper Legend.
Algosea was built in 1998 at Alabama Shipyards in Mobile for Danish owners, Danneborg. It traded internationally for them until 2005 when Algoma Tankers acquired the ship and modified it for Canadian service. It is an ice class, double hulled vessel with phenolic epoxy coated tanks. It measures 11,290 gross tons and 16,775 deadweight.
Histria Tiger is owned in Romania, but registered in Liberia and is a chemical and oil products tanker measuring 25,864 gross tons and 40,416 deadweight. The ship was built in 2008. Romanian ships are very rare in Halifax, but the country has developed a shipbuilding industry, with major yards in Constanta and Galati. This ship was built at the former yard. [Istria refers to the first Greek colony in what is now Romania.]
Clipper Legend is sister to Clipper Lancer which was in earlier in the week. Measuring 6522 gross and 10,048 deadweight it is a chemical tanker, registered in the Bahamas, and owned by the Danish group Nordic Tankers. It was built in 2004 by the Yardimci Tersanesi A.S. in Tuzla, Turkey.
.
Posted by Mac at 7:04 PM