The one month period between October 17, 1991 and November 17, 1991 was an incredibly busy and exciting one in Halifax harbour. It was certainly exceptional, if not unique. Since it is unlikely that another month will ever equal it - here it is in a nutshell: 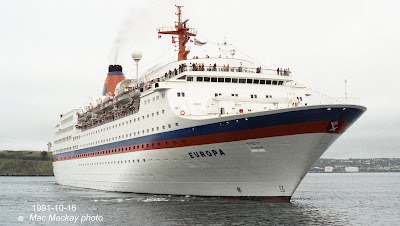 1. The last day of the cruise season, October 17: Europa sailed along with Crystal Harmony, Golden Odyssey and Renaissance Three. No sooner had the ships left than a T-33 training aircraft crashed into the sea, close to shore on the eastern side of the harbour entrance. A total of 16 ships and boats responded to the tragedy, but both persons on board were presumed dead.

2. October 18 Avis Faith was finally able sail, It had arrived September 12 with a broken down generator and many other deficiencies. Part of its cargo (including containers of Cuban rum) were shipped on to Montreal by rail.

3. Also able to sail on October 18 was Leros Sun. It had been towed into Halifax by the Irving Cedar on October 5 after main engine failure. Drawing only 12 feet of water (its loaded draft is 50 feet) it dwarfed the freight shed at pier 33-34.

4. The SD14 type cargo ship Advance, which arrived on October 15 was found to need many repairs, and was held up until November 18 when it was allowed to sail. Even then, all might not have been well with her main engine! 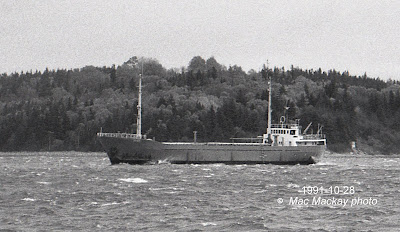 5. October 28 the small cargo ship Dimar B requested entry into Halifax with engine trouble. The ship was promptly seized by authorities and sent to a remote navy pier. Its crew was detained and implicated in yesterday's haul of 7 tonnes of hashish on a dump truck near Chester, NS. The ship was eventually determined to be the mother ship and its captain the head of a drug ring. He was extradited to Scotland for trial.

6. On October 30 Zara sent a Mayday message from 500 km south of Sable Island in hurricane conditions. The ship was taking on water and its main engine had failed. CCG and civilian ships headed to its aid. Eventually the ship was able to restart its engine and arrived in Halifax October 31 at reduced speed, escorted by CCGS Alert. 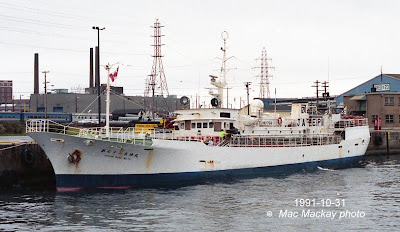 7. Eishin Maru No.78 arrived in Halifax October 31 after a harrowing experience. Normally among the most seaworthy of vessels, this tuna longliner was struck by a very high wave 160 km south of Sable Island, during the same hurricane conditions. The wave broke two wheelhouse windows, flooded the bridge and knocked out electronics, steering and engine controls. 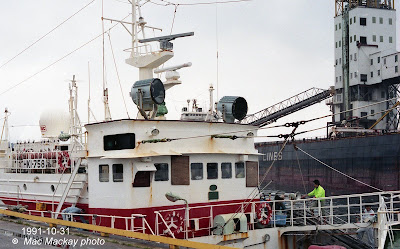 8. The only English speaker, and only female among 22 persons on board, a Canadian fisheries observer acted as salvage master, interpreter and radio operator. Once the crew were able to restart the engine, but using emergency manual steering and without throttle control, the boat made it into Halifax under escort of CCGS Edward Cornwallis and the supply vessel Triumph Sea.
In case these conditions sound familiar this was The Perfect Storm in which the US fishing vessel Andrea Gail was lost October 29. Numerous other vessels were hit by the storm, and several others limped into Halifax over the following days. The following are only some: 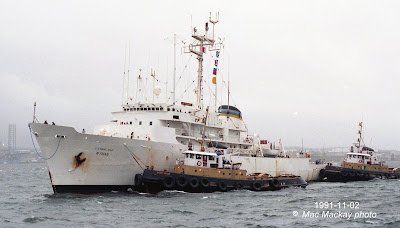 9. USNS Wyman a weather and research ship arrived November 2 and spend five days putting itself back together. It took both Point Vim and Point Vigour to get her alongside. 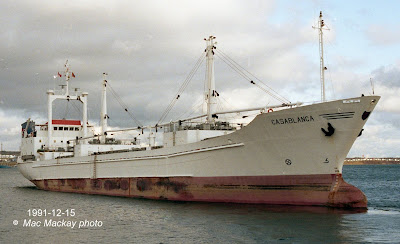 10. The Dutch owned reefer Casablanca had storm damage already when it issued a Mayday November 7, 330 km SE of Halifax due to an engine room fire. The crew sealed off the engine room and pumped in CO2, eventually extinguishing the fire. She remained powerless however and the tug Irving Elm towed her into Halifax, arriving November 7. Repairs took until mid-December. 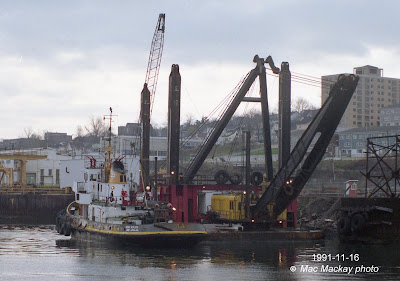 11. The tug Irving Hemlock had the dredge Shovelmaster and two dump scows in tow off Halifax en route from Sheet Harbour to Liverpool November 11 when the scows went adrift. The tug brought the dredge into Halifax and another tug, Irving Elm went out in very poor conditions to look for the scows, but did not find them. Later in the week two smaller tugs found the scows and beached them for later recovery.

12. The Cuban controlled Albonica sailed November 17 after a week in port for repairs. 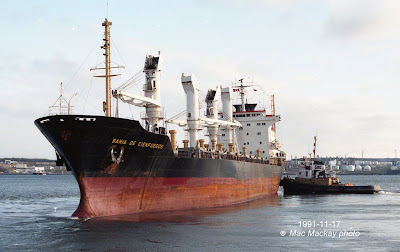 13. Bahia Cienfuegos (another Cuban) tied up November 14 for repairs. Her list was only one of several issues that took until November 17 to sort out. She sailed for Montreal after spare parts arrived. A crew member also defected. 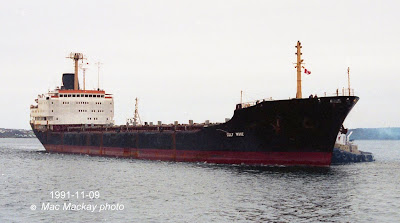 14. Another Cuban controlled ship, Gulf Wave, was the first to arrive, on November 9. It remained in port until November 15 undergoing repairs. 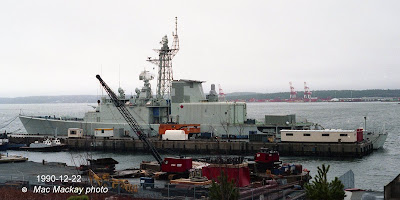 15. Canadian ships had their problems too. HMCS Algonquin was handed over the to the RCN with known deficiencies after TRUMP (TRibal Upgrade and Maintenance Program) which had lasted over four years, starting at Davie, Lauzon, but completed in Halifax. On November 15, during inclining trials at HMC Dockyard, the ship healed over to 25 degrees (5 degrees beyond the intended 20 degrees) and was only prevented from capsizing by the dock she was tied to and some hastily arranged pumps. Salt water damage was extensive. One cruise engine will have to be removed and rebuilt. (A new cruise engine will be installed from stock and the damaged one will be rebuilt and returned to stock.) There was also damage to wiring and systems totalling about $1mn. 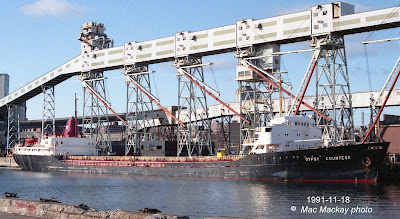 16. The lovely old steam powered Gypsy Countess (ex Gypsum Countess) was making for Halifax under reduced speed in severe weather when she lost all power November 16. The tug Point Halifax towed the ship into Halifax November 17. The ship is fully loaded with gypsum and is bound from Little Narrows, NS to the US. It eventually sailed Janaury 31, 1992. 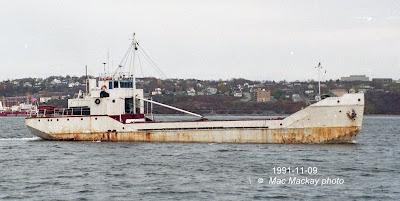 17. One of the strangest ships to call in Halifax in some time was Fermont built in 1944 in England as an emergency cargo ship for the Normandy invasions, and expected to be expendable. After many years of service on the St.Lawrence River, its current owner got into trouble in Quebec for trying to go to sea with cargo, and no certification or clearance. After some jail time he "registered" the ship in Tennessee as a pleasure craft, and left Halifax November 11 in ballast. After hopscotching down the coast via Lunenburg and Shelburne, he set out November 15 into the teeth of a gale to cross the Gulf of Maine. On November 17 she washed up on Seal Island off Nova Scotia's southwest tip lacking the power to keep clear of the coast. Her crew abandoned the ship and rapidly "faded into the woodwork" never to be seen again.
The CCG recovered the ship's fuel by pumping it into rubber bladders, then ferrying them to the mainland by helicopter. The ship was then left to break up (which it did.)
A typical month? By no means, but it it was not as unusual as you might think. Things are pretty quiet in Halifax nowadays by comparison.
The Good Old Days?
Maybe.
.
Posted by Mac at 7:17 PM