Highlanders off to North Sydney, Salarium to go too 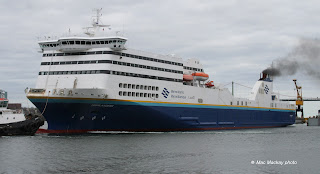 1. Tugs assist Highlanders out of the Novadock, but the ship is using its own thrusters to do most of the work turning south. 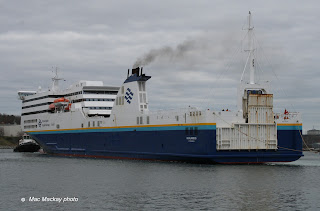 2. The ship has a broad stern ramp and bow doors.

The Marine Atlantic Inc ferry Highlanders left the Novadock floating drydock late this afternoon. After doing a compass swing south of George's Island the ship headed home to North Sydney to resume operations between North Sydney and Port aux Basques.
Her spot in the Novadock will apparently be taken by sister ship Blue Puttees in a few days.

The ship arrived in Halifax on April 10 after less than a year in service with MAI.
The ship was due to leave the drydock at 0800 hrs this morning. The harbour was fairly busy all day, so it may have been availability of tugs that caused that time to be changed to 1400. By 1400 however, with tugs standing by, and presumably a pilot aboard, why did it take until 1530 for the pilot to call for clearance, and 1600 before the lines were let go? One would hate to suggest that shipyard workers were looking for overtime, but it is an all to obvious conclusion.
The shipyard has come in for criticism (unjustified in my opinion) in the last few days for laying off eighty some workers on completion of work on the Highlanders and Salarium. The critics think that because the yard received government money that workers should be kept on even if there is no work for them to do. Sorry but the money was to improve the yard and carry out the defence work, not to provide featherbed accommodation. 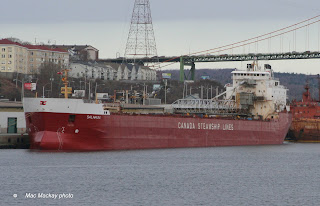 3. Salarium is now ballasted down and was to sail this afternoon. It is now scheduled to go at midnight.