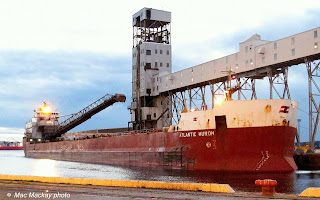 1. Atlantic Huron at pier 25-26. After working well into the night last night, the ship had not started to unload at 7 this morning. Thanks to artificial lighting on the adjacent dock it appears to be in bright sunshine, but the sun had not risen yet.

Despite dire predictions on the future of this ship on this site three years ago (which proved to be untrue-the ship was not sold for scrap) the bulker Atlantic Huron continues to work for Canada Steamships Lines and arrived in Halifax last evening with another load of grain.
Its first load this year was on May 5, a little later than its April 15, 2011 arrival.
Built in 1984 at Collingwood and converted to a self-unloader at Port Weller in 1989, the ship was also widened at Port Weller in 2002.
CSL has new ships on the way. The new Baie St-Paul is on its delivery trip from China and is off Florida bound for the Lakes before winter, and similar ships are to follow. There are older ships than Atlantic Huron in the CSL fleet that will likely be replaced before this one, so it has a few years left. However as it approaches the 30 year mark one has to wonder how much longer it will serve.
Posted by Mac at 10:33 PM