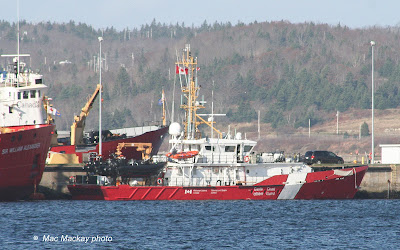 CCGS Caporal Kaeble at the BIO dock yesterday, with a tarp over the name, prior to an unveiling ceremony.

At the "unveiling" ceremony for CCGS Caporal Kaeble VC at BIO yesterday, the Defense Minister allowed as how the new Hero class of nine patrol boats will have to be armoured up.

First it is of interest to note that the boats' design criteria must have been established a long time ago. With the Coast Guard and the RCMP as the operators and users of this craft, it was always assumed that the (civilian) CCG would operate the boats and that the RCMP would provide whatever weaponry was needed, and that it would likely be portable. Up-arming (or armoring as he said) could cost a lot of money, and in fact may be very difficult with such small craft.To make such an announcement well into the construction period of the boats (the third is soon to be launched, and the ninth is to be complete in 2014) indicates a shift in policy somewhere.


Second, what is the Minister of Defence doing in this, since the boats would be the responsibility of the Minister of Fisheries and Oceans (for the CCG) and the Solicitor General (for the RCMP). Has the Minister of Defence decided to take over the boats? He has been front and centre with them since Day 1, both as political minister for Atlantic Canada, but also in promoting shipbuilding. His role as Minister of Defence in this file has always been a mystery to me.
Third has there been pressure applied by the US to up the ante on our patrol capabilities to align more with the USCG, which is a military organization, and which arms all its patrol craft? This seems highly likely, since the boats will be used in border patrol, but it would be a huge change to the CCG to make it a military organization, and hardly the kind of policy shift to be quietly mentioned in a press interview. The RCMP's much reduced marine division (it was at one time comparable to the USCG, having its roots in the Revenue Service) would seem a more likely place for this policy to go than to the Coast Guard of the RCN.