Earl Grey - back from dumping day 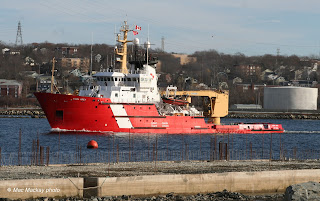 1. CCGS Earl Grey returns to base at BIO this morning.
CCGS Earl Grey returned to port this morning after standing by for dumping day. The start of the annual local lobster from Halifax round to the Bay of Fundy sees hundreds of boats putting to sea loaded with  traps, and some inevitably get into trouble and need assistance. The start of this year's season was delayed by a day because of high winds, so conditions were virtually ideal for this morning's start.
The Canadian Coast Guard's ships are all on standby and spotted in various locations for dumping day. Since all ships are multi-tasked for search and rescue, the buoy tenders are included.
Earl Grey was built in Pictou, NS in 1986 to a design by Robert Allen Ltd, and has been based in this region ever since. Built along supply ship lines and fitted with a heavy crane it was a departure from the standard CCG light icebreaker / buoy tender design. It will be interesting to see if replacement ships, which may be announced soon, will follow this pattern or revert to the more traditional look.
Earl Grey was named after Canada's governor general, 1904-1911, who was also the donor of the Grey Cup, awarded annually to the Canadian football championship team. This year marked the 100th anniversary game, although the cup was donated in 1909.
CCGS Edward Cornwallis was built in 1986 and has the traditional layout of accommodation aft and working deck amidships. It is performing similar standby duty off southwestern Nova Scotia today. It has the added capability of of helicopter deck and hangar. 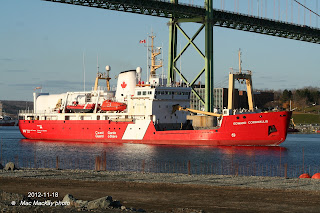 ﻿At least two rescues were carried out in the southwest this morning-one by helicopter.
Posted by Mac at 12:20 PM