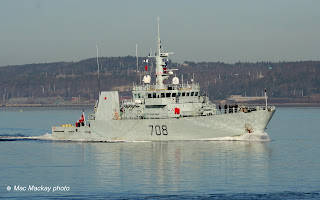 HMCS Moncton emerged from Bedford Basin today on a training run. The ninth ship in the Kingston class Maritime Coastal Defence program, it was launched on December 5, 1997, delivered on February 27, 1998 and  commissioned July 12, 1998. Based in Halifax, it has ranged as far afield as Norway when it participated in a NATO mine warfare exercise.
Fifteen years ago Moncton was preparing for launch at Halifax Shipyard, while the bows of three sisters (which arrived  from Georgetown, PE on a barge) await connection to their hulls.
Posted by Mac at 10:06 PM