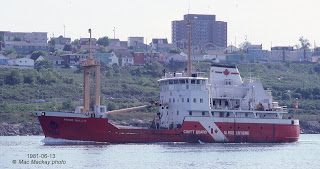 1. Provo Wallis steams out the Narrows in Halifax in June 1981.

The Canadian Coast Guard buoy tender Provo Wallis has been sold-again-provisionally, the fifth try this year.
As reported here on April 4, 2012 and November 29, 2011, the ship was declared surplus and offered for sale a year ago, with a minimum price of $400,000. A bid for $406,000 fell through in January, another for $425,000 fell through in February. Again offered in April for a minimum of $350,000 there was no sale. It was posted again in June for $300,000 and still no sale.
It was most recently offered for sale October 18, with a closing date of October 25, with - wait for it - a minimum asking price of $65,000. Currently a bid of $75,000 is being entertained, but the sale has not been finalized.
I have ranted about this fiasco in the past, where surplus but serviceable government ships are allowed to moulder until they are virtually worthless - or the conditions of sale and removal are so onerous that the bidders cannot hope to comply. If the ship was indeed fairly appraised at $400,000 originally (and I doubted this), then why could they only get $75,000? Surely there is a responsibility for this loss to taxpayers.
The poor old Provo Wallis is not the only example. A tugboat was recently sold by the feds for the paltry sum of $17,500 because it had been laid up and neglected since 1997! Except for exercising the motors once in a while, the tug (and a pair of dredges and several mud scows) had effectively been left to rot. If they had been sold promptly when the feds got out of dredging, the tug would have fetched a decent price.
A military passenger boat, used in Halifax Harbour was also sold recently for only $15,000 after being laid up for years. All its certificates had been allowed to lapse and no maintenance done on it. Both vessels went for little more than the value of their engines (if they could be made to work.)
Appalling government waste it not news, sadly it is all too common, but it is still a shame.
Posted by Mac at 9:43 PM