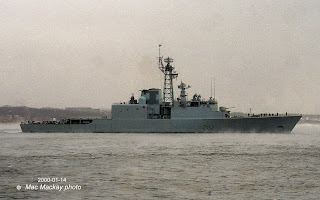 HMCS Athabaskan in sub-zero conditions, January 14, 2000. The ship can work in winter, but not in ice.

The Department of Public Works has issued a tender call, through its national public tendering website, for tug services to tow HMCS Athabaskan from St.Catharines, ON to Halifax, during the nmonth of December.
Thanks to CBC News, we know that the ship's refit will not be completed by the end of the navigation season on the St.Lawrence Seaway (usually around December 25.) Therefore the government has decided that the ship must be returned to Halifax for completion and trials, which could not be conducted on the Great Lakes in winter time. The government will also pay the bill for the towing.
The refit was awarded to Seaway Marine and Industrial Inc (the former Port Weller Dry Dock) and the ship sailed from Halifax soon after the opening of navigation in spring 2012. See Shipfax from March 20: http://shipfax.blogspot.ca/2012/03/hmcs-athabaskan-of-to-refit.html
It has always been a contentious issue that strategic resources (i.e. warships) could get hung up on the Lakes over the winter. Even the St.Lawrence River can become clogged with ice late in the year and warships particularly are not suited for navigation in such conditions. Several previous refits had to be completed in Halifax to avoid winter on the St.Lawrence. If memory serves me at least one of the Tribals completed its last major refit (the TRUMP program) in Dartmouth, with workers from Quebec coming to Halifax to do the work.
Posted by Mac at 7:55 PM