Carol - bulkers in the Basin 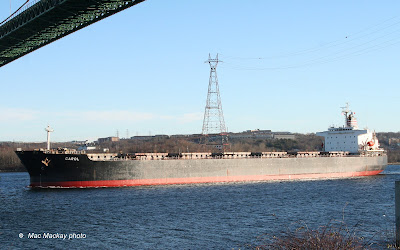 The Malta flag bulker Carol arrived to anchor in Bedford Basin this morning. Built in 1999, Carol is 39,996 gross tons and 75,609 tonnes deadweight.  Operated by NYK Bulkers Atlantic NV of Antwerp, it is managed by NYK Ship Management of Singapore for the Japanese company NYK.
It has aboard a partial load of grain from the St.Lawrence River and will top off here before heading to sea. It may have to wait for a time since the grain is just arriving by rail.
On the way in  the ship passed the outbound Atlantic Huron headed in the opposite direction - to the Lakes.

2. Meanwhile Atlantic Huron is away from  from National Gypsum and preparing to turn outbound.