Bulk cargo is not that common in Halifax, but we seem to be having a run on it at the moment. The large grain elevators in the port are used for storage and distribution of grains and wood pellets. Cargo arrives by truck, rail or by sea. It is sent out by truck for local use or exported by sea. 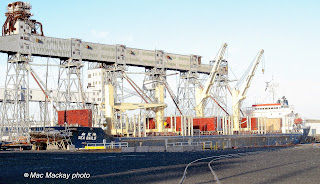 1. Sea Bailo is finishing up loading at pier 28. The forward holds are full and the spouts are filling up the after hold. Note Chinese and English characters on the ship's bow.

The bulker Sea Bailo arrived on November 13 and has been loading at pier 27-28, and will be completing today. The ship is a typical four crane bulker, of 17,162 gross tons/ 26,611 deadweight. The ship was built in 1998 by Xiangang Shipyard in Tianjin, China., it is operated by Cosco Qingdao of Shandoing, CHina, and flies the Panamanian flag. 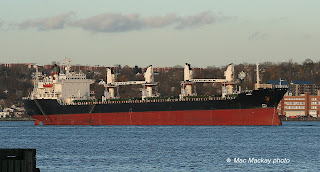 2. Alpha sits at anchor awaiting her turn at pier 28.

Arriving this noon another ship of the same type will take its place this evening. Alpha is 17,065 gross tons/ 28,005 deadweight, but was built in 1984 by Hitachi Zosen Corp of Maizuru, Japan. It had previously carried the names Island Gem and Island Triangle. It has been a Greek ship for its entire career, but now flies the Marshal Islands flag and works for Load Line Marine SA of Athens.
Posted by Mac at 5:13 PM