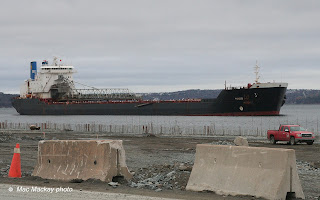 The self-unloader Pioneer sailed this morning with a load of gypsum for Portsmouth, NH. A frequent caller since built way back in 1981, the ship has been absent from Halifax recently due to the slow down in gypsum shipments.
Owned by Marbulk Shipping Inc (MSI) the ship is registered in Vanuatu. MSI is a subsidiary of Marbulk Canada Inc (MCI) and is one of the few shipping companies based in Calagary, AB. MSI is 50% owned by Algoma Central Corp and 50% by CSL. The ship works in the 23 ship CSL International/ Oldendorff/ Klaevenes pool of self-unloaders, operated out of Beverly, MA. CSL acquired their 50% interest in MCI in 2000 from the Upper Lakes Group.
The ship was built by Port Weller Dry Docks in St.Catharines, ON as the Canadian Pioneer, with dimensions suitable for the St.Lawrence Seaway. In 1988 the ship was re-0named and flagged out and has rarely seen in the Seaway since.
Gypsum ships tend to last a long time due to the non-corrosive, non-abrasive nature of the cargo, however the ship also carries, rock, sand, and coal depending on market demand. It is also fitted with a Doxford 76JC4R engine, the last of its type built by Doxfords (subsequent engines of the same design were built under license.) Noted for their rugged reliability, the slow speed Doxford engines tend to last slightly less than forever.
See previous posts about the ship's distinctive funnel marking.
Posted by Mac at 11:30 AM