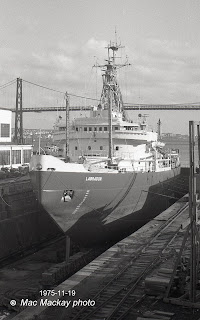 CCGS Labrador in Halifax Shipyard's graving dock.
The first RCN vessel to transit the Northwest Passage, it was the navy's last arctic class ship when decommissioned in 1957 and handed over the Department of Transport.


Irving Shipbuilding hasn’t had much good news to report recently. With their Georgetown (Eastisle) yard shut down and little work in Shelburne (Shelburne Ship Repair) and much of its workforce now laid off, and the sudden departure of Halifax Shipyard’s CEO, the signing of a new labour agreement in Halifax with the CAW union should have been a bright spot this week.

However it is overshadowed by the possibility that a big change may be coming in the much touted Defence Procurement program.

The big shipbuilding agreement saw Halifax “the winner” with the award of the arctic patrol vessels (up to eight ships) and the frigate replacement (12 ships) but it now seems that the arctic patrol component may be canned.

In recent rumblings in Ottawa, from the Minister of National Defence among others, it seems that the Canadian Coast Guard will become an Armed Force, and will given the defence of the arctic - something the navy has had no experience with since the 1950s. At that time their icebreaker HMCS Labrador, was yanked from them and handed to the Department of Transport (later becoming the Coast Guard.) Powerful factions in the RCN have always shunned the arctic as beneath their dignity, but creating a new Armed Force seems an extreme way of dealing with these snobs. It seems more likely that political pressure from the US for border security and all sorts of environmental/ sovereignty/ and arctic navigation issues are at the root of the “armoring up” of the CCG.

This would mean cancellation of the Navy’s arctic patrol vessels in Halifax Shipyard, and adding ships to the Polar icebreaker program with Vancouver’s Seaspan Shipyard. The boats planned for Halifax were compromise ships, with reduced endurance/ice capability to offset the need for speed, weight of armour and weapons. The CCG wants long endurance heavy icebreakers that could work year round in any conditions, and with relatively light armament. This would be easy to achieve by building more Diefenbaker class icebreakers (only one had been planned originally.) With the USA in severe compromise for heavy arctic ships, and extended navigation in the arctic, this would make excellent sense.

But what a kick in the pants for Halifax!

So what will happen? According the analyst, Halifax will need a lot of work to make up the gap between the end of the Hero class and the ramp up to the start of the frigates, but there is no sign of anything yet. Much scrambling is in order, and much uncertainty is ahead for Halifax-in my prediction, lasting for two or three years at least. Worst case scenario - a major strategic alliance with a proven foreign hi-tech shipbuilder and the farming out of the really lucrative work.