As reported November 4 Busan Express is a new to Halifax post-Panamax ship for Hapag-Lloyd. It arrived again yesterday afternoon and sailed this morning. It held off in Bedford Basin to allow Canada Express and Atlantic Compass to dock., so there was enough sunlight to take another picture. 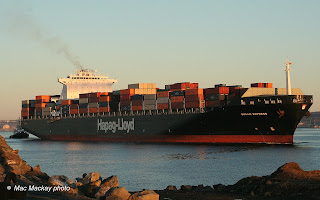 1. Tug Atlantic Oak has the stern line as outbound escort through the Narrows.

To reduce air draft for bridge clearance, the ship is fitted with a folding signal mast and a very squat funnel. 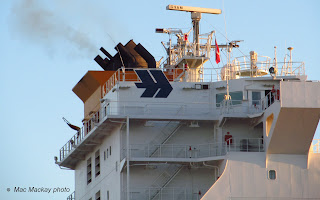 2. The funnel is so short that the Hapag-Lloyd logo is mounted on the house. 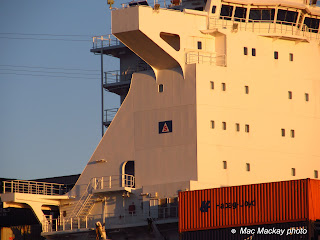 3. The ship's owners' logo is displayed discretely on the side of the house. Owners are Norddeutsche Reederei H. Schuldt GmbH &Co KG.

Built in 2004 by Daewoo Shipbuilding and Marine Engineering Co Ltd of Goeje, South Korea, the ship was launched as Northern Monument, but was immediately placed in long term charter to Hapag-Lloyd.The ship is precisely 300m long and has a container capacity of 6.732 TEU of which 550 may be refrigerated. At 75,990 gross tons and 85,000 deadweight it is one of the largest container ships calling on Halifax.  ﻿
Posted by Mac at 8:34 AM